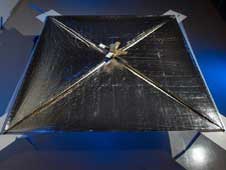 Picture it -- a sail boat floating across the starry sky. Well, it's not exactly what you'll see, but it is the idea behind NASA's newest experimental mission.

Later this summer NASA will attempt to deploy and operate the first spacecraft in low Earth orbit propelled only by the power of sunlight. Solar sail propulsion uses sunlight to propel vehicles through space, much the way the wind pushes a sailboat through water. The technology requires intercepting the constantly streaming solar energy, called photons, with giant, reflective sails of lightweight material. Over time, the continuous pressure of the sun's light provides sufficient thrust for a small spacecraft to travel in space and alter its orbit.

Sounds easy, right? On Earth, solar cells have been turning sunlight into electricity for centuries, so why hasn't the space community succeeded in using solar power for in-space transportation?

Although the idea of "sailing" through space has been around since the 17th century, it's never quite come together. Both visionary astronomer Johannes Kepler and Russian space pioneer Friederich Tsander proposed the concept of sailing though space using only the force provided by the energy in sunlight. But at the time, materials strong, thin and durable enough to withstand the harsh radiation environment of space didn’t exist.

Solar sail propulsion continued to captivate engineers in modern space history, and in recent years, several advances have been made toward testing and deploying solar sails on Earth and in low-Earth orbit by the space agencies of the U.S., Germany and Japan. In 2005, the nonprofit space advocacy organization The Planetary Society, launched Cosmos-1 into space on a Russian Volna rocket, but unfortunately the first stage of the launch vehicle never completed its scheduled burn, and never had a chance to deploy and demonstrate solar sail propulsion technology.

Still, a solar sail has yet to be successfully deployed in space.

Through an innovative partnership between NASA's Marshall Space Flight Center in Huntsville, Ala.; Ames Research Center at Moffett Field, Calif.; and several industry and academic partners, NASA will endeavor to propel a small robotic craft through space without fuel. In fact, the only power required to run the "brains" of this satellite consists of a few batteries to run a simple radio and computer. The mission, called NanoSail-D, is one of two technology development payloads from NASA that will ride into space on the upcoming flight of the new Falcon 1 launch vehicle, developed by Space Exploration Technologies (SpaceX) of Hawthorne, Calif.

"The main objective of this mission is to gain experience in quickly developing a low-cost nanosatellite project, but we're hopeful we’ll do one better and successfully deploy a solar sail," said Edward "Sandy" Montgomery, NanoSail-D payload manager at the Marshall Center. "Ames recently conducted a rapid mission for an astrobiology payload, but this is the first time NASA has created a solar sail for nanosatellites. This was quite a challenge and many innovative solutions were needed, as previous solar sail demonstrators were designed for large satellites. We're thrilled to have this unique opportunity to combine heritage solar sail experience and technology in a new way of doing business." NanoSail-D is a very small satellite, just a bit longer than a loaf of bread and weighs in at around 9 pounds. Developed and built in about six months time, the engineering team built on Ames' small satellite development experience and Marshall's expertise in solar sails and advanced propulsion systems. Packed up inside the satellite is an ultra-thin 100 square foot sail that, if all goes as planned, will be ejected from the launch vehicle shortly after it reaches orbit. Three days later, a timer in the spacecraft computer will command four hinged doors to open allowing the square sail to deploy. The sail material is a very light gossamer fabric thinner than a piece of paper, coated with a thin layer of aluminum to enhance its thrust-producing properties.

The spacecraft bus is adapted by Ames from their standard bus architecture used on previous missions, GeneSat and another mission planned for later this year, PharmaSat. Marshall provided the remainder of the spacecraft and the solar sail payload, harvesting the sail material from an earlier Marshall solar sail propulsion mission tested at Glenn's Plum Brook facility in 2005. The NanoSail-D team also includes academic and industry partners who provided economical commercial-off-the-shelf components that were quickly configured and integrated to create the satellite.

"The cost to build and deploy spacecraft systems is directly related to size and mass, and rocket fuel is heavy," said Dean Alhorn, NanoSail-D lead engineer. "That's what makes a solar sail nanosatellite so attractive."

Experimenting with solar sail propulsion and nanosatellite technology improves NASA's ability to rapidly develop and launch innovative technologies into space. This mission also provided an excellent collaborative opportunity between NASA, industry partners and academics to test an experimental solar sail in space at a manageable scale.

"Solar sail propulsion, if it achieves its full promise, would enable fundamentally different space missions not feasible or even possible with conventional propellants," said Mark Whorton, NanoSail-D principal investigator at Marshall. "For example, solar sails could provide a steady thrust for a small spacecraft to perform certain maneuvers, such as hovering at a fixed point above the earth’s surface. We could place a spacecraft at a set point between the Earth and sun, closer than what is possible today, that would provide faster warning for approaching solar storms."

From launch to de-orbit, the NanoSail-D flight is anticipated to last under two weeks.

"If the deployment is successful, the sail will deploy and we’ll be able to pick up slight changes in NanoSail's orbit a few days into the mission," said Montgomery. "This is an exciting, highly experimental mission, but we're hopeful our little ship will enjoy a successful voyage to the stars."

To track the progress of the NanoSail-D mission, visit: