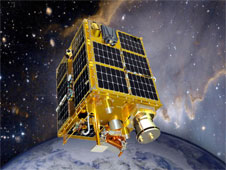 An artist's rendering of the FASTSAT minisatellite in Earth orbit. (NASA/MSFC)
View large image After two successful years of on-orbit operations, NASA's Fast, Affordable, Science and Technology Satellite, or FASTSAT, mission is coming to an end. FASTSAT successfully demonstrated a capability to build, deploy and operate a science and technology flight mission at lower costs than previously possible.

The satellite was designed, developed and tested over a period of 14 months at NASA's Marshall Space Flight Center in Huntsville, Ala., in partnership with the Von Braun Center for Science & Innovation and Dynetics, both of Huntsville, and the Department of Defense's Space Test Program.

"FASTSAT demonstrated that an 'outside the box' solution afforded a highly synergistic concept which satisfied experiment, payload and launch schedule requirements," said Mark Boudreaux, FASTSAT project manager at the Marshall Center. "This successful mission brings us closer to realizing a unique, small-satellite platform and the environment needed to perform low-cost research in space."

FASTSAT was launched by the DoD Space Test Program from Kodiak, Alaska, in November 2010, and completed two years on orbit. It served as an autonomous research laboratory in low-Earth orbit, containing all the necessary resources to conduct scientific and technology research operations for all onboard experiments.

"This project has validated the effectiveness of a commercial/government partnership, leveraging the resources and capabilities of Dynetics and the expertise of the Marshall Space Flight Center," said Steve Cook, Dynetics’ director of Space Technologies.

Marty Kress, executive director of the Von Braun Center for Science & Innovation, agreed. "FASTSAT provided a comprehensive and cost-effective capability, which resulted in affordable and flexible access to space for a diverse set of users," he said. "Such a minisatellite capability is an invaluable asset, making future partnerships between government, industry and academia more viable and mutually beneficial than ever before."

Among the NASA innovations enabled by FASTSAT during its mission to test low-technology-readiness experiments were: the Miniature Imager for Neutral Ionospheric Atoms and Magnetospheric Electrons, or MINI-ME; the Plasma Impedance Spectrum Analyzer, or PISA; and FASTSAT’s ability to eject a nanosatellite, NanoSail-D, from a minisatellite.

MINI-ME, managed by NASA's Goddard Space Flight Center in Greenbelt, Md., continues to collect data on neutral atoms and electrons from Earth’s magnetosphere in a variety of conditions. The data collected from MINI-ME is helping NASA scientists and engineers design two similar instruments for a sounding rocket mission planned for early 2013. That mission, dubbed VISIONS for "visualizing ion outflow via neutral atom imaging during a substorm," will aid researchers in better understanding space weather.

"Among the MINI-ME science results are the first observations of neutral molecular outflow," said Mike Collier, principal investigator for MINI-ME. "Data from MINI-ME are helping the VISIONS investigators optimize the mission science return."

PISA, also managed by Goddard, has completed 15,000 hours of observations and gathered more than 15 gigabytes of raw data captured in a variety of locations and environments during the mission.

"FASTSAT has been a great opportunity to test the PISA instrument concept, while gathering valuable data about how the ionosphere changes over time as the sun gets closer to its 11-year peak of activity," said Doug Rowland, principal investigator for PISA. "We've seen the ionosphere go from being 'depressed' close to launch, to a more 'inflated' state over the last two years.

"With the strong need for improved understanding of our space environment, platforms such as FASTSAT and instruments such as PISA are going to become more important, providing low-cost, flexible platforms for space environment monitoring and scientific measurements," Rowland added.

The NanoSail-D satellite was jointly designed and built by NASA engineers from the Marshall Center and NASA's Ames Research Center in Moffett Field, Calif. Key sail design support was provided by ManTech/NeXolve Corp. of Huntsville. The NanoSail-D experiment was managed by Marshall and was jointly sponsored as a DoD Space Test Program payload by the U.S. Army Space and Missile Defense Command and the Von Braun Center for Science & Innovation.

The deployment of Nanosail-D from FASTSAT was the first time NASA deployed a solar sail in low-Earth orbit. "The NanoSail-D mission produced a wealth of data that will be useful in understanding how these types of passive deorbit devices react to the upper atmosphere," said Joe Casas, FASTSAT project scientist at the Marshall Center.

"The data collected from the mission is intended to study and better understand the drag influences of Earth's upper atmosphere on satellite orbital re-entry," Casas said.

Thirteen Huntsville-area firms and the University of Alabama in Huntsville were part of the project team.

For more information about FASTSAT, visit:


Read the FASTSAT fact sheet at: