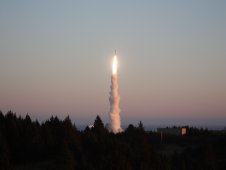 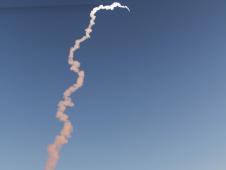 FASTSAT separated from the Minotaur IV rocket approximately 22 minutes after launch, entering low-Earth orbit 406 miles above Earth and immediately began powering up the spacecraft. NASA ground stations are tracking the spacecraft and the spacecraft has been activated. The small satellite command center located at the Huntsville Operations and Science Control Center at NASA's Marshall Space Flight Center in Huntsville, Ala. is continuing commissioning operations of the satellite.

"This milestone is a testament to our FASTSAT team that worked tirelessly to design, build and test a fully functional, low-cost satellite in a year," said Mark Boudreaux, FASTSAT project manager at the Marshall Center. Boudreaux said the team maximized the number of payloads onboard and designed the satellite to support the Evolved Expendable Launch Vehicle Secondary Payload Adaptor (ESPA) ring to increase opportunities for ride sharing with Department of Defense ESPA configurable launch vehicles.

For the first 11 days after launch, the spacecraft and six onboard atmospheric and technology demonstration experiments will go through an on-orbit commissioning phase. Once commissioning is complete, the next 180 days will be focused on science operations. A checkout and performance analysis of each science instrument will be performed and then, one by one, each experiment will turn on to perform its science objectives.

The microsatellite FASTSAT, weighing just under 400 pounds, will serve as a scientific laboratory containing all the resources needed to carry out scientific and technology research operations for the mission time period. FASTSAT was developed with a simplicity in the design of the spacecraft subsystems that provide power management, onboard storage of experiments data, control of experiments, communications with ground stations, propellantless mechanisms for attitude control and a GPS system for navigation.

FASTSAT launched on the STP-S26 mission -- a joint activity between NASA and the U.S. Department of Defense Space Test Program. The satellite was designed, developed and tested at the Marshall Center in partnership with the Von Braun Center for Science & Innovation and Dynetics Inc. of Huntsville. Dynetics provided key engineering, manufacturing and ground operations support for the new microsatellite. Thirteen Huntsville-area firms, as well as the University of Alabama in Huntsville, also were part of the project team.

For more information about the FASTSAT mission and status updates visit: