The Boldest Test Flight in History 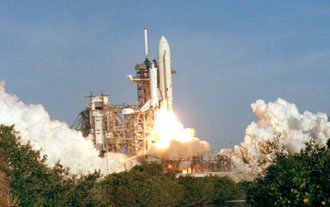 Early on the morning of April 12, 1981, two astronauts sat strapped into their seats on the flight deck of Columbia, a radically new spacecraft known as the space shuttle.

John Young, the commander, had already flown in space four times, including a walk on the moon in 1972. Bob Crippen, the pilot, was a Navy test pilot who would go on to command three future shuttle missions. But nothing either man had done or would do was quite like this.

But on that spring morning -- just twenty years to the day since Russian Yuri Gagarin became the first human in space -- all of that was yet to come. America had not launched a human into space in six years, and to that point every manned space flight had followed the same basic design: put a capsule on top of a rocket, strap in the crew, fire the engines and go. After the mission, only the crew capsule -- which wasn't reused -- would return.

Young and Crippen were about to launch in humankind's first re-usable spacecraft. The orbiter, which many people think of as the "shuttle," would launch like a rocket and land like a plane. The two solid rocket boosters that helped push them into space would also be re-used, after being recovered in the ocean. Only the massive external fuel tank would burn up as it fell back to Earth. It was all known as the Space Transportation System; their mission, STS-1.

On a long list of firsts, one stunning fact stands out: it was the first time in history a new spacecraft was launched on its maiden voyage with a crew aboard.

"It wasn't until we got to like a minute to go," said Crippen, "that I turned to John and said, 'Hey, I think we might really do it!'"

Just seconds after 7 a.m., Columbia roared off of Launch Pad 39A and into the Florida sky above NASA's Kennedy Space Center. About eight minutes later, Young and Crippen were doing laps around the Earth at over 17,000 miles an hour.

"When the solids {solid rocket boosters} lit off, there was no doubt you were headed someplace," said Crippen. "It was a nice kick in the pants."
(+ Young and Crippen Recall the Flight) 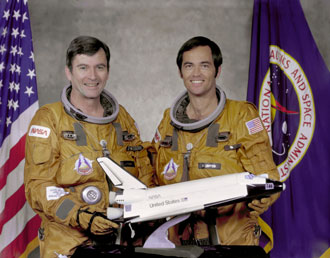 Once in orbit, the crew tested the new craft's systems, fired rockets used for changing orbits and changing position, and opened and closed the payload bay doors. The payload bay, which would ultimately be used as a science lab, launch platform, repair shop and docking station, was empty for this mission.

After 36 orbits and almost 55-hours , Young guided the 96-ton Columbia -- the largest, heaviest craft to launch and land to date -- to a perfect touchdown at Edwards Air Force Base in California. Young and Crippen had accomplished more than 130 flight test objectives.

Crippen remembers his commander's elation: "John got out of his seat and he was bouncing around. I was ready to applaud. It was a super moment."

As former NASA Historian Roger Launius wrote on the mission's 20th anniversary, "no other nation on the face of the Earth had the technological capability to build such a sophisticated vehicle during the 1970s. Few could do so today."

The mission demonstrated a host of cutting edge technologies, from the innovative shuttle main engines, to the ceramic tiles designed to prevent overheating, to the advanced digital fly-by-wire control and computer system, adapted by many commercial airplanes. Since STS-1, the shuttle has flown more than a hundred times.

"It is unlike any other thing that we've ever built," said Crippen. "Its capabilities have carried several hundred people into space, it's carried thousands of pounds of payload into space. It gave us Hubble, it gave us Galileo, it gave us Magellan. And it's allowed us to essentially build a space station, although we've got some work still to do on that. So it is something that has been truly amazing and I'm honored to have been a part of it." 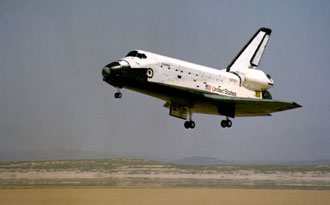 Tragically, Columbia and its seven STS-107 crewmembers were lost on Feb. 1, 2003, when the orbiter broke apart on re-entry. Speaking at a memorial service, Crippen eulogized the crew as well as the spacecraft he rode on its maiden voyage.

"Columbia still had a great many missions ahead of her. She along with the crew had her life snuffed out in her prime. Just as her crew has, Columbia has left use quite a legacy ... Hail Columbia. "

Now the shuttle has returned to flight, with new equipment and procedures designed to keep the shuttle and crew safer than ever. As it completes its mission, NASA engineers are drawing on its powerful propulsion elements to build the next generation of spacecraft that will return astronauts to the moon and pave the way for journeys to Mars and beyond.

Someday before the end of the next decade, astronauts will once again strap into a brand new craft, built on the best elements from the shuttle and Apollo. And once again, they will roar into the Florida sky, writing the next chapter in NASA's long history of exploration.
› Back To Top