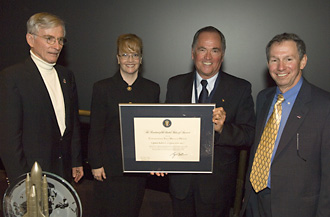 Former NASA astronaut Bob Crippen, pilot on the first space shuttle mission in 1981, has been honored with the nation's highest award for spaceflight achievement, the Congressional Space Medal of Honor.

Crippen was awarded the medal on April 26 at a ceremony in Washington commemorating the 25th anniversary of the flight, known as STS-1. NASA Administrator Michael Griffin presented the award in the name of President George W. Bush and on behalf of the U.S. Congress.

"This medal, awarded by the Congress of the United States, commemorates publicly what all of us who know Bob Crippen already understood: he is an authentic American hero," said Griffin.

"He holds an unsurpassed record of dedicated service to this country as a military aviator, test pilot, engineer, and astronaut, including his assignment as pilot for the historic STS-1 mission, recognized with this award. And no one has more effectively applied such an extensive operational background more to the demands of senior management in both government and industry. And above all, Crip is a loyal friend to all who know him. We at NASA are honored by his association with our agency."

In receiving the distinction, Crippen said the recognition was unexpected. 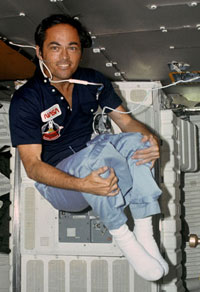 "It was such a surprise. I am totally overwhelmed," said Crippen. "Just look at the names of the people who are on the list. They are heroes in the truest sense of the word and I can't believe someone would think to include me in such distinguished company. I'm so honored."
+ See Full List of Awardees

The Congressional Space Medal of Honor was authorized by Congress in 1969 to recognize "any astronaut who in the performance of his duties has distinguished himself or herself by exceptionally meritorious efforts and contributions to the welfare of the nation and mankind."

Crippen became a NASA astronaut in September 1969. He was a member of the astronaut support crew throughout the entire Skylab program and the Apollo-Soyuz Test Project, which was completed successfully in July 1975.

For his first mission into space, he was selected for the initial flight of the space shuttle in what is considered the boldest test flight in history. Along with his crewmate, veteran commander and Apollo moonwalker John Young, he successfully piloted the orbiter Columbia on her maiden flight April 12, 1981.

The two astronauts tested the space shuttle's systems for two days and 36 orbits before safely gliding the unique spacecraft to a safe landing on a California desert runway.
+ Read More About STS-1
+ STS-1 Flash Feature

Crippen went on to command three future space shuttle missions and served in a variety of supervisory positions at NASA before becoming the director for the Kennedy Space Center in Florida, where he safely managed 22 space shuttle flights. 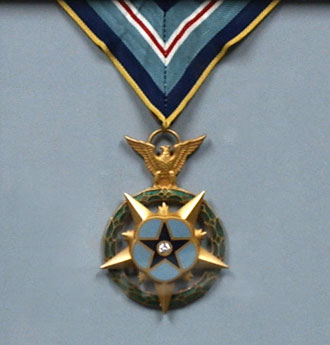 Young was awarded the Congressional Space Medal of Honor in May 1981. Apollo 11 astronaut Neil Armstrong was the first recipient of the award in 1978 as part of a celebration to mark NASA's 20th anniversary. Since then, a total of 28 astronauts have now received this prestigious recognition of their service, bravery, and dedication.

"You know, when you work really hard for something for a long time it's almost impossible to believe that it's coming true," Crippen said, recalling his STS-1 launch in a NASA.gov podcast.
+ Listen to Podcast
+ View Transcript

"It was really loud, and then when the {solid rocket boosters} lit off there was no doubt you were headed someplace. We just all hoped it was in the right direction. It was a nice kick in the pants."

"The space shuttle has been a fantastic vehicle," Crippen continued. "It is unlike any other thing that we've ever built. Its capabilities have carried several hundred people into space, it's carried thousands of pounds of payload into space. It gave us Hubble, it gave us Galileo, it gave us Magellan. And it's allowed us to essentially build a space station, although we've got some work still to do on that. So it is something that has been truly amazing and I'm honored to have been a part of it along with thousands of other people that made it possible."