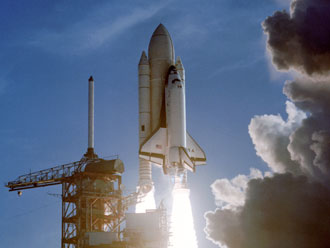 Early on the morning of April 12, 1981, two astronauts sat strapped into their seats on the flight deck of Columbia, a radically new spacecraft known as the space shuttle.

John Young, the commander, had already flown in space four times, including a walk on the moon in 1972. Bob Crippen, the pilot, was a Navy test pilot who would go on to command three future shuttle missions. But nothing either man had done or would do was quite like this.

1991: 10th Anniversary Coverage
One of the most comprehensive accounts of Columbia's first flight can be found in this April 1991 edition of NASA's Space News Roundup, including a special article about the orbiter's development titled "The Amazing All-Electric Flying Machine," written by Brian Welch.