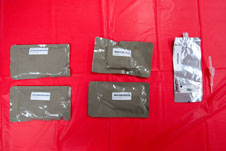 The chicken, brisket, corn and baked beans are thermostabilized space food items. Such products are like canned foods found in grocery stores, but they are packaged in pouches. Photo credit: NASA
› View larger

Food scientists at NASA’s Johnson Space Center in Houston have prepared a special "All-American Meal" for the final space shuttle crew as the iconic American spacecraft makes its last voyage. The public is invited to prepare the meal on Earth and share it virtually with the astronauts aboard space shuttle Atlantis.

All are invited to share the "All-American Meal" with the crew on July 14. The crew’s dinner time is scheduled to be in the early to mid-afternoon U.S. time.

"Since the crew is launching in July, we thought it would be fun to have a typical summer meal often enjoyed in our backyards with friends and family," said Michele Perchonok, NASA food scientist and manager of the shuttle food system. 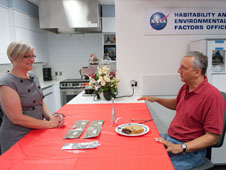 The crackers, brie cheese, sausage and apple pie are commercial off-the-shelf products that were repackaged for spaceflight. To assist in preparing the meal, click on the link below to view the recipes—what the food scientists call "formulations"—for the regular space food items that are on the menu:

Space food has come a long way since the early days of the space program. Currently, there are about 180 different types of food and beverage items available. The food items range from shrimp cocktail to seasoned scrambled eggs.

The food list includes freeze-dried items and thermostabilized foods, which are foods that have been processed with heat to destroy microorganisms and enzymes that can cause spoilage. Many of the food items come from commercial products that are turned into freeze-dried creations. Other commercial products, especially natural form items such as nuts and crackers, are purchased and then repackaged for flight.

For more information about the STS-135 mission, including the crew’s menus, visit: