Grow Text SizeShrink Text Size
Space Shuttle Endeavour: A Lasting Legacy
Space program employees, media and several hundred thousand spectators held their breath in rapt attention as the minutes ticked down to launch -- then space shuttle Endeavour's main engines ignited for the final time at 8:56 a.m. EDT Monday, May 16, 2011, to lift it and its crew of six off of Launch Pad 39A at NASA's Kennedy Space Center in Florida.

Endeavour sailed through the clouds headed for the International Space Station (ISS) on its historic final flight for the Space Shuttle Program, the STS-134 mission, carrying in its payload bay the Alpha Magnetic Spectrometer-2 (AMS) and essential supplies, including two communications antennas, a high-pressure gas tank and additional parts for the Dextre robot.

Aboard Endeavour on a 16-day mission were Commander Mark Kelly, Pilot Greg H. Johnson and Mission Specialists Michael Fincke, Andrew Feustel, Greg Chamitoff and Roberto Vittori with the European Space Agency. This was the first shuttle flight for Fincke, a veteran space flier, and Vittori, who was the last international astronaut to fly aboard a shuttle. 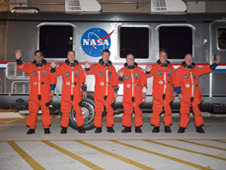 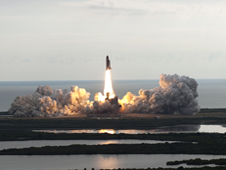 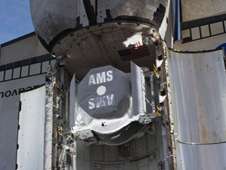 Image above: The Alpha Magnetic Spectrometer-2 in Endeavour's payload bay is featured in this image snapped by an STS-134 crew member. Shortly after this image was taken, the AMS was moved from the payload bay to the station's starboard truss. Photo credit: NASA
› Larger image 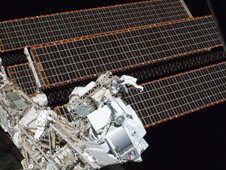 Image above: Mission Specialists Andrew Feustel and Greg Chamitoff, both STS-134 participate in a spacewalk as construction and maintenance continue on the ISS. Photo credit: NASA
› Larger image 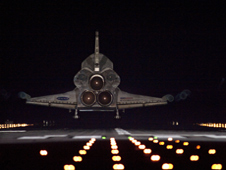 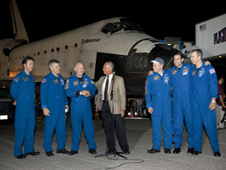 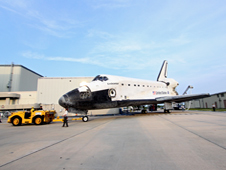 Image above: A "towback" vehicle slowly pulls shuttle Endeavour into Orbiter Processing Facility-1 where it will be processed for retirement.
› Larger image 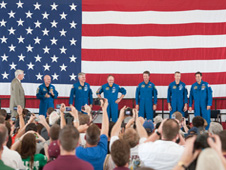 
At the post-launch news conference Associate Administrator for Space Operations Bill Gerstenmaier said, "The mission in front of us is no easy mission, the EVAs (extra vehicular activities) are very demanding -- but it'll be exciting to see the AMS get installed on the station and get some real research data on the ISS."

As Endeavour slowly approached the station, with both spacecraft moving at 17,500 mph, it paused about 600 feet away to do the standard back flip maneuver that gave ISS Expedition 27 Commander Dmitry Kondratyev and Flight Engineers Paolo Nespoli and Cady Coleman an opportunity to take about 500 photos of the shuttle's thermal protection tiles to look for possible damage before it flew ahead of the station and backed into the docking port.

Once the hatches were opened, the shuttle and station crew enjoyed a brief welcoming ceremony and immediately got down to business as they began a busy work schedule for the almost 12 days of docked operations.

The first task on tap was for Fincke and Vittori. They used the shuttle's robotic arm to lift the Express Logistics Carrier-3 (ELC-3) packed with heavy spare parts from Endeavour's payload bay and handed it off to the station's Canadarm2, operated by Johnson and Chamitoff.

Next, the 15,000-pound AMS, an advanced particle physics detector, was installed robotically atop the station's starboard 3 truss. The AMS began immediately sending data down to researchers on Earth about cosmic particles and will continue to provide important data in understanding the origin of the universe.

Four spacewalks were planned for Feustel, Chamitoff and Fincke for installation and maintenance tasks, retrieving materials and experiments, and installing an antenna.

The first spacewalk by Feustel and Fincke included a variety of maintenance tasks and working with the special purpose dexterous manipulator called Dextre. They wrapped up their spacewalk in eight hours and seven minutes.

The station and shuttle crew joined together in the Kibo module where they accepted a special call from Pope Benedict XVI conducted from Vatican City. Thomas Reiter, astronaut and director of the European Space Agency's human spaceflight operations, introduced the crew.

The second and third spacewalks kept the crew busy with maintenance and repair tasks.

The shuttle crew also had an opportunity to participate in education events with students as young as kindergarten through the fifth grade during in question-and-answer sessions.

Vittori joined fellow Italian Nespoli to accept a special call from Giorgio Napolitano, the president of the Italian Republic from Rome.

The station crew eventually was then reduced by three as Kondratyev, Nespoli and Coleman said their farewells to their station crewmates and closed the hatch of their Soyuz for the journey back to Earth. This was the first time a Soyuz departed from the space station while a shuttle was docked to it.

Fincke and Chamitoff completed the mission's fourth and final spacewalk moving the shuttle's 50-foot boom. The orbiter boom sensor system now has a new home on the space station's main truss and a new name. The boom now will be known as the Enhanced International Space Station Boom Assembly. It can be connected to the Canadarm2, the space station's robotic arm, to double its reach. Their last major task was completing work on Dextre.

May 27 was a day for milestones, Fincke and Chamitoff surpassed the 1,000th hour astronauts and cosmonauts have spent spacewalking in support of space station assembly and maintenance. The spacewalk brought the total time spent for station assembly construction and maintenance to 1,002 hours and 37 minutes during 159 spacewalks. It also was the last spacewalk to be carried out by space shuttle crew members. The spacewalk that will take place during the shuttle program’s final mission, Atlantis' STS-135, will be conducted by space station residents.

Coming to the end of their mission, the Endeavour crew transferred the last of the equipment and supplies to the station as the shuttle and station crews wrapped up their docked activities and prepared to close the hatches between the two vehicles.

After more than 11 days of joint operations on May 29, the shuttle crew said their final goodbye's to the Expedition 28 crew members, Commander Andrey Borisenko and Flight Engineers Ron Garan and Alexander Samokutyaev, who will continue at the orbiting outpost providing station maintenance and support. The hatches between the space station and Endeavour closed for the last time.

"Endeavour departing," said Garan after the traditional ringing of the station's bell wishing the departing crew, "fair winds and following seas," an old seafaring phrase for a safe journey.

As Johnson was about to begin the flyaround, Kelly radioed mission control in Houston that he could see the particle physics detector Endeavour had brought to orbit. "It's a new day for science on the space station," he said.

After a flyaround, Kelly took the controls for a test of the automated rendezvous and docking system called STORRM, an acronym for Sensor Test for Orion Relative Navigation Risk Mitigation. STORRM is a system that uses a vision navigation sensor flash lidar and high-definition docking camera being developed for use on future spacecraft.

The next morning Endeavour's astronauts got a special wakeup call to kick off a day devoted to preparing for their return to Earth. The wakeup call featured an original composition "Dreams You Give" by Brain Plunkett, the second place winner in the shuttle program's Original Song Contest.

Preparations for landing were in progress but the six crew members took time for a tribute to Endeavour, speaking about the history of the youngest space shuttle and the work accomplished by its crews during its 25 trips to space.

On their final day in space, the STS-134 crew members were awakened by "Sunrise Number 1," performed by the band Stormy Mondays, the contest's first place winner.

The payload bay doors were closed and the astronauts prepared for landing. Following a "go" for the deorbit burn from mission managers at NASA's Johnson Space Center in Houston, and cooperating weather at Kennedy, Endeavour made its final approach to the Shuttle Landing Facility on the first opportunity.

Endeavour rolled to a stop on Runway 15 at 2:35 a.m. June 1, completing the STS-134 mission and marking the 25th nighttime landing in shuttle program history.

The last orbiter to be built, Endeavour's highlights include a daring satellite recovery, repair and redeploy; the first servicing mission to NASA's Hubble Space Telescope; delivery of the first American U.S. segment of the International Space Station, the Unity node; and taking the first educator astronaut, Barbara Morgan, to space on the STS-118 mission.

After processing at Kennedy for retirement, Endeavour will be transported to the California Science Center in Los Angeles, to be put on permanent display -- a coming home of sorts as Endeavour was built in Palmdale, Calif., and often landed in the golden state at Edwards Air Force Base.

Endeavour was named in tribute for the first ship commanded by James Cook, an 18th century British explorer, navigator and astronomer. Endeavour held true to its namesake for voyages of exploration and science, flying 25 missions since its maiden voyage May 7, 1992, spending 299 days in space, orbiting Earth 4,671 times and traveling 122,883,151miles.

"It's sad to see her land for the last time," Kelly said after touchdown, "but she leaves a great legacy."
Elaine M. Marconi
NASA's John F. Kennedy Space Center
› Back To Top