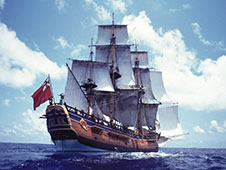 HMB Endeavour, a replica of the bark Endeavour on which James Cook completed his first voyage of exploration, recently began a trip around Australia. During the early part of that voyage, the space shuttle Endeavour, named for Cook’s ship, is spending about two weeks on a voyage of its own, to the International Space Station.

The bark’s circumnavigation of Australia is scheduled to take about 13 months, with stops at 18 ports. It is part of the Australian National Museum’s historic fleet and averages about 2.5 nautical miles an hour under sail. Using two discretely installed engines, it averages about 5 knots.

STS-134 is shuttle Endeavour’s 25th and final flight. The shuttle orbits the Earth once every 91 minutes or so at an altitude of about 220 miles at 17,500 mph, about 10 times the speed of a high-powered rifle bullet.

The two captains recently exchanged letters of greetings and well wishes. Here are the letters of each.