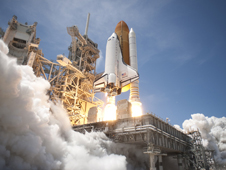 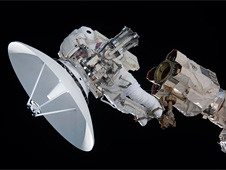 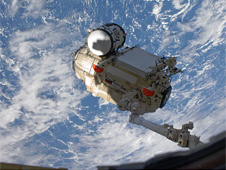 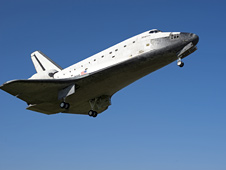 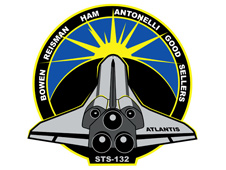 Image above: The STS-132 mission patch features Atlantis flying into the sunset as the end of the Space Shuttle Program approaches. However, the sun also is heralding the promise of a new day as it rises on the new ISS module, "Rassvet," the Russian word for dawn. Image credit: NASA
› View larger image

Space shuttle Atlantis thundered away from NASA's Kennedy Space Center on May 14, 2010 at 2:20 p.m. The on-time liftoff under a picturesque Florida sky was a perfect beginning to Atlantis' last scheduled mission, STS-132. The shuttle carried a six-person crew on a journey to deliver a new Russian module and several critical spare parts to the International Space Station.

"There are thousands of folks out there that have taken care of this bird for a long time," Commander Ken Ham said after Atlantis was cleared for launch. "We're going to take her on her 32nd flight, and if you don't mind, we'll take her out of the barn and make a few more laps around the planet."

Tucked into the shuttle's payload bay was the Russian-built Mini Research Module-1 known as "Rassvet," meaning "dawn." Nearly 20 feet long and weighing more than 17,700 pounds including its cargo, the module features eight workstations designed for a variety of science experiments and educational research.

The ambitious tasks ahead would be taken on by a crew of experienced space fliers. Ham was joined by Pilot Tony Antonelli, Mission Specialists Garrett Reisman, Michael Good, Steve Bowen and Piers Sellers.

During the astronauts' first full day in orbit, the standard inspection of the orbiter's protective thermal coverings was completed using a backup camera system when a snagged cable temporarily prevented use of the intended laser and digital cameras. Both the primary and backup systems are part of the orbiter boom sensor system that attaches to the shuttle's robotic arm.

Atlantis docked with the International Space Station on May 16, two days after liftoff. Ham guided the orbiter through a graceful backflip known as a "rendezvous pitch maneuver," giving station crew members the chance to take nearly 400 photos of the shuttle. Finally, the two spacecraft linked up at 10:28 a.m. EDT as the pair sailed 220 miles above the South Pacific Ocean.

"We've been here before, but it's bigger than we remember -- and, speaking for myself, better than I remember," Ham said as docked operations officially began. "I love this place!"

The combined crew got right to work, using the station's Canadarm2 robotic arm to remove a cargo carrier from Atlantis' open payload bay to the station's mobile transporter. Mounted on the carrier were important new equipment and spares to be installed during the mission's three spacewalks, including a backup space-to-ground antenna and six 375-pound batteries.

The first of the mission's three spacewalks started the next morning at 7:54 a.m. when Reisman and Bowen switched their spacesuits to battery power and floated out of the station's Quest airlock. Riding the station's robotic arm, Reisman carried the boom for the new antenna from the cargo pallet up to the Z1 truss and returned to the cargo pallet to grab the six-foot-wide antenna.

The pair then installed the antenna on the waiting boom, where it will help provide two-way data, voice and video communications for station residents. Reisman and Bowen added a spare-parts platform to the station's Dextre robotic arm and loosened the bolts holding the new batteries to the cargo carrier before wrapping up the 7-hour, 25-minute outing.

Installation of the Rassvet research module was the crew's next assignment. Ham and Antonelli used Atlantis' robotic arm to lift the nearly-20-foot-long component from the shuttle's payload bay, then handed it off to the station's robotic arm. Reisman guided the new module into the Earth-facing port on the Zarya module, achieving a flawless docking with one millimeter of clearance on either side of Rassvet's docking probe.

"Looks like a pretty good docking," Sellers reported to Mission Control. "Straight down the middle, got capture and contact."

Good joined Bowen for the second spacewalk, which got off to a head start at 6:38 a.m. May 19. First, Bowen fixed the snagged cable that had interfered with the early inspection of Atlantis' heat shield. After adjusting the cable and using a plastic tie to keep it in place, Mission Control announced the fix was successful.

Next, the astronauts installed four of six new batteries on the station's port 6 truss, the station's backbone, transferring the old batteries to the cargo carrier for the return trip to Earth. Good and Bowen tightened the bolts on the new space-to-ground antenna before coming back inside as the 7-hour, 9-minute spacewalk ended.

Hatches between the station and Rassvet were opened the following day, as Atlantis and crew finished the mission's first week and enjoyed a few hours of off-duty time.

The final two port 6 truss batteries were installed during the mission's third and final spacewalk. Good and Reisman swapped out the remaining batteries and installed a backup ammonia coolant line between the port 4 and port 5 truss segments. They also left a new power and data grapple fixture inside the Quest airlock. The fixture will be installed by the station crew on the exterior of the Zarya module this summer.

With all the mission's major tasks accomplished, Good and Reisman headed back to the airlock after working outside the station for 6 hours and 46 minutes.

The astronauts finished transferring equipment and supplies from Atlantis to the space station as the docked portion of the STS-132 mission drew to a close.

"Thank you, Ken, and thank you to the whole crew," said station Commander Kotov as the Atlantis and station crews prepared to part ways. "Thank you for an excellent job, for your patience, for your work -- for everything."

Ham answered, "Through our entire docked timeframe here, we were a 12-person crew that operated together, and that was the only way we got everything done. ...We've had a great time together."

Atlantis undocked from the station May 23 at 11:22 a.m. after a weeklong stay at the orbiting complex. The shuttle circled the station at a distance of 400 to 600 feet and finally pulled away with a separation burn an hour and 15 minutes later.

The late inspection of Atlantis' protective skin went off without a hitch, and the shuttle was cleared to land.

Atlantis touched down at 8:48 a.m. May 26, gliding smoothly along Kennedy's Runway 33 after 186 orbits and nearly 12 full days in space. With Ham and Antonelli at the controls, the orbiter returned to its home port for what was planned to be the last time. During its 25 years of spaceflight, Atlantis completed 32 missions and traveled more than 120 million miles.

"We've all flown on Atlantis now, and some of us have flown on her a couple of times. She's a great ship," Antonelli said hours after landing, adding that it was a "real honor" to be on what may be its last flight. "We're happy to bring her back home to you here in Florida."
Anna C. Heiney
NASA's John F. Kennedy Space Center
› Back To Top