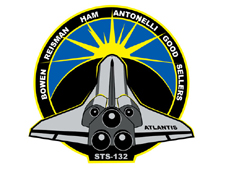 The STS-132 mission patch features Atlantis flying off into the sunset as the end of the Space Shuttle Program approaches. However, the sun is also heralding the promise of a new day as it rises for the first time on a new International Space Station module, the Russian Rassvet Mini-Research Module-1. Photo Credit: NASA

After almost 25 years and more than 115 million miles, space shuttle Atlantis is down to just one final mission – but it will be going out on a high note.

STS-132 will deliver to the International Space Station the Russian Rassvet Mini-Research Module-1, only the second Russian module to ever be carried into space by a space shuttle. It’s a fitting final payload for the orbiter that not only launched the first into space, but also was the first shuttle to dock to the Russian Space Station Mir – in fact, Atlantis was the shuttle behind seven of the 11 shuttle missions to Mir.

"Atlantis has a history of being the shuttle that did the most international things," said Emily Nelson, lead space station flight director for the mission. "It’s the orbiter that the Russians have known best, because it’s one that came to their space station most often, and it’s one that we used to deliver a module for them in the past."

Whether or not they recognize it by name, many people are likely familiar with Atlantis’ work. Besides the visits to Mir, Atlantis carried the Magellan Spacecraft into orbit, sending it on its way to Venus, where it mapped 98 percent of the planet from orbit. The same year – 1989 – it also deployed the Galileo Spacecraft to Jupiter, where it collected data on the planet and its moons for eight years.

Closer to home, Atlantis has visited the International Space Station 10 times – STS-132 will be its 11th trip – delivering among other pieces of hardware, the United States’ Destiny Laboratory and Europe’s Columbus. And just last year it made the final flight to the Hubble Space Telescope, bringing upgrades that should allow the telescope to see further into the universe than ever for years to come.

"Atlantis has clearly been a work horse of the space shuttle fleet over the years," said Mike Sarafin, lead STS-132 shuttle flight director. "The shuttle program history is pretty complicated, but I think it will show that Atlantis is a remarkable vehicle."

But Atlantis is not finished making history just yet – there are still a few firsts in store.

For instance, the installation of Rassvet. Normally when a new piece of the space station is installed, all the work is done (the hooks are engaged and the latches latched to attach the new module to the rest of the station) from the space station side of the equation. That’s true for all of the international partners involved in the station except for Russia. Until now, the Russian modules have all been launched into space on their own, not carried up by a space shuttle, and the Russian system makes use of that by relying on the momentum of the new module as it approaches to force the latches.

That won’t be possible this time around. Instead, the STS-132 crew will use the space station’s robotic arm to attach it. The arm will be extended to just about its full 58 feet to reach Rassvet’s home on the Zarya module, which will make it difficult to push with much force. In addition, the commands to the module to work those latches and hooks will have to take a long circuitous route from the robotic arm controls inside the Cupola, through the United States segment of the station to the Russian segment, then back to the United States segment and out through the robotic arm to the Rassvet.

"Installing that module is going to be an interesting day," STS-132 Commander Ken Ham said. "If anything goes wrong in this delicate plan, we have to get it to work right. We think, based on the analyses, that we’re going to be just fine. However, we’re prepared for all sorts of problems that could arise getting that thing in there."

If the team is lucky, some of Atlantis’ good luck will rub off on the module while it’s in the shuttle’s cargo bay, and the installation will go off without a hitch – Atlantis tends to be the member of the shuttle fleet with the fewest problems in flight, so it wouldn’t be out of character.

"Like any home or any car that you’ve had over the years, the shuttles have their nuances," Sarafin said. "Atlantis tends to behave very well when it’s flying. That’s a nice luxury to have."
› Back To Top