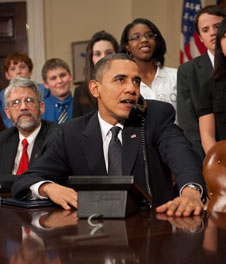 U.S. President Barack Obama, accompanied by White House Science Adviser John Holdren on the left, and middle school children, talks on the phone from the Roosevelt Room of the White House to astronauts on the International Space Station. Credit: NASA/Bill Ingalls

Calling from the Roosevelt Room in the White House, the President congratulated the two crews on their continuing successful mission, saying the work on board is a testimony to why exploration is so important and that his commitment to NASA is unwavering.

Endeavour and its crew launched Feb. 8 on the STS-130 mission to the space station. During the mission, astronauts installed the Tranquility node and a cupola with seven windows that provide a panoramic view of Earth, celestial objects and visiting spacecraft. Tranquility and its cupola are the final major U.S. portions of the station.

President Obama also told the crew that his administration is “very excited about putting research dollars into the technologies” that will get humans to Mars and beyond.

The President also asked the crew about the experiments being performed on the space station saying that some of the experiments are in line with where his administration wants to see NASA go.

At the conclusion of the event, the President repeated that he is proud and excited about the work being done on the space station and told the crew that he is committed to continuing human space exploration and complimented the crew on being “great role models.” 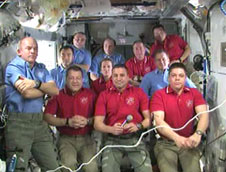 “Be sure and tell your families that we appreciate them letting you float up in space like this,” said Obama.

The students participating in the event were in Washington D.C. as part of 39 teams competing for the “Future City” engineering competition hosted by National Engineers Week that builds on the President’s "Educate to Innovate" campaign that emphasizes inspiring students to pursue excellence in science, technology, engineering and math (STEM).

› View Video
› Read the Transcript of the Conversation