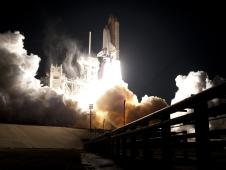 Image above: An exhaust cloud builds at Launch Pad 39A as space shuttle Endeavour lifts off into the night sky. Image credit: NASA/Sandra, Joseph and Kevin O'Connell
› View larger image 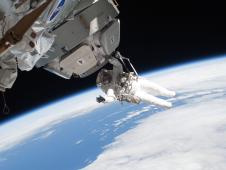 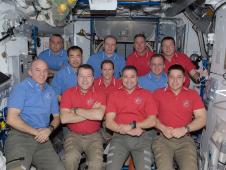 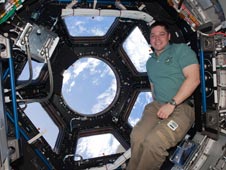 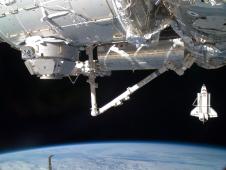 Image above: With the newly-installed Tranquility node and cupola in the upper left, the space shuttle can be seen backing away after undocking with the station. Image credit: NASA
› View larger image 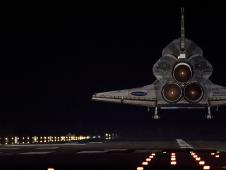 
The view from space has always had the "wow" factor. Now thanks to the bay window-like cupola attached to the new Tranquility node, the International Space Station has a panoramic view that takes the wow factor to the max.

The STS-130 astronauts delivered the two new space station pieces, the final components of the U.S. segment of the station, aboard space shuttle Endeavour during the first mission of the year.

After the now-standard robotic inspection of the shuttle's exterior, the crew began to prepare for rendezvous and docking with the station as the mission's two spacewalkers, Patrick and Behnken, checked out their spacesuits. The pair conducted all three of the mission's spacewalks, overcoming several minor spacesuit glitches along the way.

At the same time, the five-member station crew also prepared for the upcoming nine days of docked operations. On board the orbiting laboratory were Expedition 22 Commander Jeff Williams, and Flight Engineers Max Suraev, Oleg Kotov, Soichi Noguchi and T.J. Creamer.

Shuttle Commander Zamka guided Endeavour to a point 600 feet directly below the station and put the shuttle into the backflip maneuver that allows the station crew to photograph the heat shield tiles on the underside to check for damage. With the inspection done, Zamka completed the docking as the two spacecraft were flying 215 miles above Earth.

After the hatches between the joined spacecraft were opened, the combined crew of 11 got down to business, preparing for the work both inside and outside the station.

During the first spacewalk, Patrick and Behnken prepared the Tranquility node for its move out of Endeavour's payload bay. From inside, Virts and Hire positioned Tranquility on the port side of the station's 10-year-old Unity node. It was secured by 16 remotely controlled bolts and the spacewalkers began the processing of connecting the new module to the station's systems. Patrick and Behnken used their second outing to do exterior work to further integrate Tranquility to the station and prepare for the relocation of the cupola.

The cupola was robotically relocated and secured to the Earth-facing port on Tranquility by Hire and Virts. With Behnken and Patrick inside this time operating the station's robotic arm, and Williams and Noguchi working the latches and bolts, a docking adapter was relocated from the Harmony module to the end of Tranquility, taking the spot where the cupola road to space. The newly located adapter will proved another docking point for visiting spacecraft.

During their final trip outside the station, spacewalkers Patrick and Behnken prepared cupola's window covers to be opened for the first time, and finished exterior work on Tranquility and the relocated docking port.

As he opened the window covers one by one, Virts became the first crew member to take in the breathtaking view that the cupola now provides, with Patrick and Behnken on the outside looking in. The observation dome’s seven windows facing Earth will greatly improve views for robotic and docking activities at the station, as well as provide scientific observations of Earth and celestial bodies. To that end, the robotic arm work station will be relocated from the Destiny lab to the cupola.

As part of cupola's dedication ceremony, a moon rock from the Apollo 11 mission was placed inside. The same rock was carried to the summit of Mount Everest by astronaut Scott Parazynski.

Station Commander Jeff Williams replaced parts on the station's water recovery system, a system that was then relocated to Tranquility along with other support systems during an extra day that was added to Endeavour’s flight. Throughout the mission, supplies and new equipment delivered by Endeavour were stowed, and work to outfit Tranquility and cupola was the focus of the combined crews. The new segments added 2,600 cubic feet to the station's interior.

The crew members took time to receive a congratulatory phone call from President Barack Obama near the end of Endeavour’s time docked to the station. The president was accompanied at the White House by a dozen middle school students from across the country who were in the nation's capital for an engineering competition.

With the mission's work completed, the hatches between the two spacecraft were closed, and Endeavour backed away from the expanded station that is now 98 percent complete by volume, 90 percent by mass. After a fly around of the station and final inspection of the shuttle, the STS-130 astronauts prepared for their return to Earth.

Despite not-so-favorable weather predictions, Endeavour landed Feb. 21, 2010, touching down on the Shuttle Landing Facility's Runway 15 at NASA's Kennedy Space Center in Florida. Completing a successful mission, the touchdown brought the shuttle and crew safely back to where their two-week, 5.7-million mile journey began.