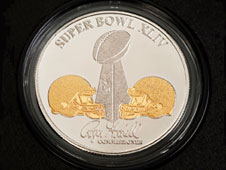 This medallion, which was flown in space aboard space shuttle Atlantis, will be used for the official coin toss prior to the kickoff of Super Bowl XLIV. Photo Credit: NASA/Glenn Research Center at Lewis Field 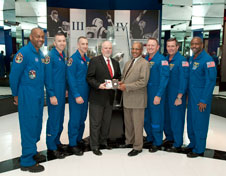 After traveling more than four million miles, and making 171 orbits around Earth on board space shuttle Atlantis, the Super Bowl XLIV opening-toss coin took a slight detour to the Pro Football Hall of Fame Museum in Canton, Ohio, on Jan. 27, before heading to the Super Bowl.

The astronauts stopped by the museum to return the silver-minted coin, as well as a few other space-flown memorabilia, including a football inscribed with the name of every member of the Hall of Fame. They also returned flown jerseys from the Detroit Lions and the Dallas Cowboys, the two teams Melvin played for in his short stint in the NFL.

After stopping at the Hall of Fame, the coin will journey to Sun Life Stadium in Miami Gardens, Fla., to be the one of the stars of the Super Bowl XLIV pre-game coin toss on Feb. 7.
› Back To Top