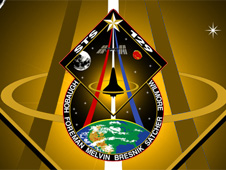 For the mission patch of STS-129, the sun shines brightly on the International Space Station above and the United States below representing the bright future of U.S. human spaceflight. Image: NASA

The spare parts delivered to the International Space Station by Atlantis during the STS-129 mission will mean spare years on the station’s life once the space shuttle fleet is retired.

“You’ll see this theme in some of the flights that are going to come after ours as well,” said Brian Smith, the lead space station flight director for the mission. “This flight is all about spares – basically, we’re getting them up there while we still can.”

With only one U.S. module left to deliver, the Space Shuttle Program is turning its attention to helping the space station build up a store of replacement parts. There are only half a dozen flights left in the shuttle’s manifest before they stop flying, and as the only vehicle large enough to carry many of the big pieces of equipment into space, several of the flights are devoted to the task. This is the first, however, and as the first this mission is dedicated to taking up the spares of the highest priority.

“We’re taking the big ones,” Smith said. “And not only are they the big ones – they’re the ones deemed most critical. That’s why they’re going up first.”

The spares are going up on two platforms – called external logistics carriers, or ELCs – to be attached on either side of the station’s truss, in hopes that wherever a failure happens, the necessary spare won’t be too far away. The ELCs carried up on STS-129 will be chocked full with two pump modules, two control moment gyroscopes, two nitrogen tank assemblies, an ammonia tank assembly, a high-pressure gas tank, a latching end effector for the station’s robotic arm and a trailing umbilical system reel assembly for the railroad cart that allows the arm to move along the station’s truss system. There’s also a power control unit, a plasma container unit, a cargo transportation container and a battery charge/discharge unit. In all, that’s 27,250 pounds worth of spares to keep the station going long after the shuttles retire.

Some of those spares would be used to replace failed components of the systems that provide the station power or keep it from overheating or tumbling through space. Others, in the case of the latching end effector and reel assembly, are essential parts of the robotics system that allow the astronauts to replace the other parts when they wear out.

“It was a long-term goal to have the full power production capability and all the international partners present and six person crew capability,” said Mike Sarafin, the lead shuttle flight director for the mission. “These are the spares that will allow us to utilize the investment that we’ve put in.” 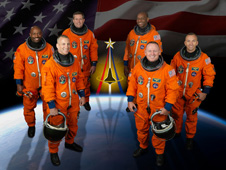 Attired in training versions of their shuttle launch and entry suits, these six astronauts take a break from training to pose for the STS-129 crew portrait. Image: NASA

NASA isn’t nearly done investing in the station, however, and the agenda of Atlantis’ crew makes that clear. In addition to the complex robotics work required to get the spares into place, there are three spacewalks scheduled to go on outside and a complicated rewiring project planned for the crew inside.

The focus for the work inside, and object of several tasks inside, will be preparing for the STS-130 mission, during which the last U.S. space station module will be delivered: the Tranquility node with its attached cupola. During the spacewalks, that will mean routing connections and preparing the berthing port on the Harmony node that it will attach to. On the inside, the work is a little more extensive. Originally, Tranquility was to be installed on the Earth-facing port of the Harmony node, but it’s since been decided that it would fit better on the port side of Harmony. And changing the plans requires significant changes to the hardware. Data, power, cooling lines, air flow – all of those connections need to be rerouted to the new location, and with double the manpower normally available at the station, a shuttle mission is a good time to get that done.

However, even with the shuttle crew at the station, resources aren’t unlimited. Any mission would consider its plate pretty full, with the robotics work required to get the spares transferred to the station, the spacewalks and the Tranquility prep work inside. But unlike the other space shuttles, Atlantis wasn’t outfitted with the system that allows shuttles to draw power from the space station. That means that where recent station assembly missions have lasted up to 17 days, Atlantis has only 11 to get to the station and back.

“All that in 11 days,” Sarafin said. “It’s a lot to package into a finite period of time; it’s a challenging mission.”

Still, the STS-129 team intends to make the most of every second it has on orbit, just as the larger shuttle and station teams will make the most of each of the remaining missions. That’s not unusual, though – Atlantis’ Commander Charles O. Hobaugh would say that it’s characteristic of the entire effort that has gone into building the station.

“There’s been a lot of work put forth to make it all successful, and it’s just incredible to see how much has been accomplished and how successful it has become,” he said. “The space station has been a long hard road, but it’s been an extremely productive road. We’ve really been able to bring together a diverse national and international background of cultures for one common cause. It’s all science and exploration and cooperation.”
› Back To Top