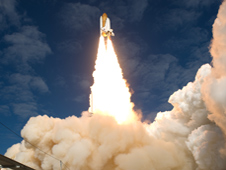 With a picture-perfect launch behind them, the first task at hand on Nov. 17 was checking the shuttle's wing leading edges and nose cap using the orbiter boom sensor system. The end of the boom consists of cameras and lasers, giving experts on the ground 3-D views of the shuttle's heat shield to ensure there wasn't any damage from launch.

Later in the day while the shuttle was catching up with the International Space Station, Bresnik, Foreman and Satcher checked out the two spacesuits they would use for the three planned spacewalks.

Once in range of the station on Nov. 18, the shuttle was delicately maneuvered into the rendezvous pitch maneuver, or "backflip," where Expedition 21 Flight Engineers Jeffrey Williams and Nicole Stott took photos from their vantage point. 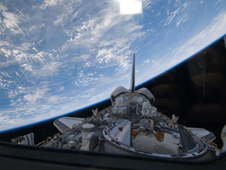 Images from the first and second inspection were sent back to Earth for experts to review, making sure the shuttle would have a safe flight back through Earth's atmosphere.

The weight and mass of the cargo flown on Atlantis was far too large to have been launched aboard any other space vehicle. Hobaugh then carefully guided Atlantis closer to the station until it was locked into the station's docking port on the Harmony node. It took a couple hours for a series of hatch leak checks to be performed and once accomplished, the hatches were opened and the Atlantis crew was enthusiastically greeted and welcomed aboard the station by the Expedition 21 team.

As the hatch opened, Nicole Stott's responsibilities as station flight engineer officially ended and she became an STS-129 mission specialist for the remainder of her time in space. Stott is the last NASA astronaut to experience the rotation of launching from and being returned to Earth by a space shuttle. In the future, a Russian Soyuz spacecraft will be used for station crew rotations.

With a demanding to-do list ahead of them, the two crews began with the first task at hand. ELC 1 was grappled from Atlantis' payload bay by Melvin and Bresnik with the shuttle's robotic arm and handed off to the station's robotic arm controlled by Wilmore and Williams. The platform was permanently installed to the outside of the station to store large cargo. 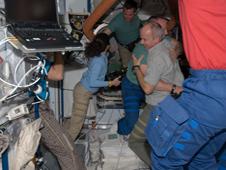 Image above: STS-129 and Expedition 21 crew members greet each other shortly after space shuttle Atlantis and the International Space Station docked in space and the hatches were opened. Photo credit: NASA/JSC
› High-res Image

That evening Foreman and Satcher spent the night camping out in the Quest airlock preparing for their first spacewalk. After stepping out into space the next day, Foreman and Satcher completed all major tasks almost two hours ahead of schedule. In addition, Foreman was able to successfully connect a cable on the Unity node -- one that was uncooperative for the STS-128 crew in September.

Inside the station, work was ongoing to prepare for the arrival of the Tranquility node, which will be flown on shuttle Endeavour's STS-130 mission targeted for early 2010.

Overnight, a false depressurization alarm sounded and woke the crew, but flight control teams on the ground determined there was no danger to the station or crew. In the STS-129 post-landing crew press conference, Satcher said, "The training the crew members received helped them deal with the false alarms that went off a few times during their stay on the orbiting outpost."

The relocation of supplies and equipment between Atlantis and the station continued Nov. 20, in addition to tackling a variety of maintenance, troubleshooting and science activities -- keeping both station and shuttle crews busy.

Early the next morning, the second carrier with almost 10,000 pounds of large spare parts, including an attitude-control gyroscope, was moved from the shuttle's cargo bay to its permanent location on the S3 side of the station's truss, or backbone.

The two platforms that were attached to the station allow additional storage space for the mountain of supplies and equipment needed for the smooth and efficient running of the orbiting laboratory, now and well into the future after the shuttles are retired.

A little later, Foreman and Bresnik made their way into the emptiness of space for the second successful spacewalk of the mission. They not only completed their tasks ahead of schedule but also accomplished some get-ahead jobs -- all in six hours, eight minutes.

Meanwhile, another success story was in the making. On the morning of Nov. 22, Bresnik was told by the Mission Control Center in Houston that his wife, Rebecca, had given birth to their daughter, Abigail Mae Bresnik. He was assured that both baby and mother were doing just fine. Atlantis' crew members were given a well-earned, half day off to celebrate. The rest of day was dedicated to preparing for the third spacewalk on Nov. 23, featuring Satcher and Bresnik.

The space excursion began more than an hour later than planned because a drinking-water valve in Satcher's spacesuit became dislodged and the helmet had to be opened to reattach the valve. With the fix behind them, Bresnik and Satcher completed all the tasks in just five hours, 42 minutes -- almost on time, regardless of the late start. 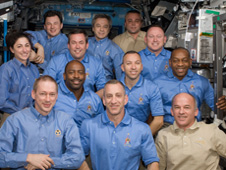 Later, the last of the mission's spare hardware was moved thanks to the combined effort of all 12 shuttle and station crew members.

On Nov. 22, the shuttle and station crew members said their final farewells before the hatches between shuttle Atlantis and the station were securely closed -- after which the shuttle crew prepared for undocking.

Wilmore eased the shuttle away from the station circling around the outpost. Crew members videoed and snapped photos of the orbiting laboratory in order to assess its exterior condition.

One more survey was in store for the shuttle's heat shield with Wilmore and Melvin using the orbiter boom sensor system -- a five-hour process.

Atlantis crew members spent part of Thanksgiving preparing for their Nov. 27 landing date. They tested the thruster jets that control the shuttle's orientation in space and during early re-entry, as well as the flaps and rudders that guide it through the atmosphere. 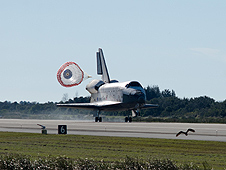 The day didn't pass without a surprise, though. A traditional turkey dinner with all the trimmings found its way aboard Atlantis before undocking -- compliments of the Expedition 21 crew members.

It was a perfect end to a nearly perfect mission. After the twin sonic booms echoed and Atlantis came out of a clear-blue sky, the vehicle and crew touched down on Kennedy's Shuttle Landing Facility on Nov. 27 at 9:44 a.m. EST.

After winding up a successful 11-day flight to deliver spare parts, other equipment and supplies to the International Space Station, the crew took their last walk around the vehicle that served them well from start to finish.

After a short ride to crew quarters, the astronauts were given a thorough medical exam and met with their families. On Nov. 28, the crew flew home to Houston, and on Nov. 30, they were honored at a homecoming ceremony held at nearby Ellington Field.

Atlantis' STS-129 mission was the 31st flight dedicated to space station assembly, resupply and maintenance -- one that should help keep the station supplied well into the future.