At 5:14 a.m. CST, Bresnik called Mission Control and announced the birth of his daughter. Abigail Mae Bresnik, weighing six pounds, 13 ounces and measuring 20 inches long, arrived at 11:04 p.m. Saturday, Nov. 21 in Houston. He reported his wife Rebecca and baby are doing well. He also thanked the flight control team and flight surgeon for their support and assistance.

Bresnik was informed of his daughter's birth through a phone patch to Atlantis from the Mission Control Center and the hospital after he woke up. He was also tied in through the station’s IP Phone to Dr. Smith Johnston, the STS-129 Flight Surgeon following his spacewalk Saturday evening during his wife’s labor until he needed to go to bed.

Bresnik will see his daughter for the first time during a videoconference planned Sunday, Nov. 22, and photos and some video of the baby will be uplinked to Atlantis. No other information will be available until after Bresnik and the STS-129 crew return to Earth. He and Rebecca offered this final word of thanks: "We are sending a big thank you to all of the people who have supported NASA and us for this mission and our special occasion."

This is the second time a baby has been born to an American astronaut during his spaceflight. Mike Fincke’s daughter was born in June 2004 while he was aboard the International Space Station.

Shortly before the launch of STS-129, Randy and Rebecca Bresnik participated in the following preflight interview. 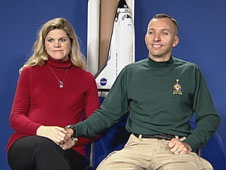 Rebecca and Randy Bresnik, STS-129 mission specialist, talk about having a baby anticipated to be delivered while the father is off the planet. Photo Credit: NASA

Why don’t we start by you each telling us how you feel about this unique situation of having a baby anticipated to be delivered during Randy’s mission.

Randy: I think like most parents, I would prefer to be there at the birth for sure, but we don’t pick this timing and so it’s to be a little bit disappointing not to see her in person right when she enters the world but fortunately through the wonders of modern technical advancements and our amazing communication systems on the ISS and space shuttle, hopefully I’ll be able to hear and see the pictures and be able to talk to her maybe on the IP phone and see some video shortly thereafter and be home only a few days afterwards.

Randy, you talked a little bit about how you might be able to hear about the birth or even see your new baby once she’s born on-orbit, but Rebecca can you tell us what special preparations you’re making for this unique situation?

Rebecca: Well for the actual birth, really just trying to work his schedule along with the delivery of the baby. Due to medical reasons I’m being induced two weeks early so we’re able to play with the date a little bit. So, I’m just working with my doctors and working with Randy’s schedule to make sure that if possible that we can do it on the day where he’s not out doing an EVA and maybe have a little more communication during that day. And then also I’m sending up a support group here and I’ve got family coming into town. My sister’s coming in for the delivery, and then my mom’s actually watching her child. So, just like I said, just setting up, making sure we have, even the dog being walked.

Randy: Family, mother and sister making sacrifices of not being able to go to the launch so they can be in position to help out Rebecca after the launch which we greatly appreciate.

Rebecca: We very much appreciate what everyone has offered to do with helping us through this.

Randy you touched on it a little bit, but from orbit once the baby’s born, what assets and resources will you have? 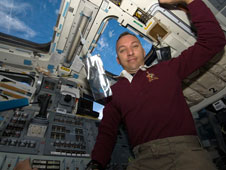 Randy: It depends on the timing of the launch. We know the baby’s due date plus or minus a little bit but it just depends on if we’re docked or not. Obviously if we’re just shuttle, there’s a few less assets. We don’t have the live video conference and that type of thing, but anything we have is far more than most military families get when somebody’s deployed and they’re not there for the birth. So if I can get a simple radio call that she’s entered the world safely and Rebecca’s doing great - everything above me on that is gravy. If we’re on, docked to the space station, obviously the communication assets we have there are a lot better and hopefully things will align and satellites will be up and I won’t be too busy and I’ll be able to have a chance to take a break maybe during lunch and come say hi.

Rebecca: And we’re being able to get some pictures and maybe a little video sent up after the fact.

You mentioned you already have a son. Does he have a special role in all of this?

Rebecca: Well he thinks he’s naming the baby Neemo, but [Randy: Or Stormy, our dog] he’s just ready to be a big brother. He’s excited about the baby. He’s always asking, “When’s the baby going to come out and play?”

Randy: He goes up to her belly and says, “Baby, come out!”

Rebecca: I say that too sometimes! 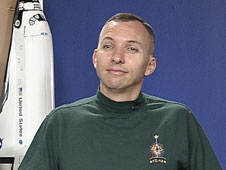 Randy: And the amazing thing about him is that a year ago today we hadn’t even met him yet. And actually tomorrow’s the anniversary of the first day we met him. Within 48 hours of being assigned to STS-129 we got the call saying we had a date to go to Ukraine for our adoption. And so we were over there 40 days last fall adopting him and we came back mid-December. So we’ve got this wonderfully happy and healthy little three and a half year old little boy whose life has changed completely. He’s gone from being in an orphanage on the other side of the planet to being in the space shuttle simulator here flying with his dad a couple weeks ago.

Rebecca: It’s pretty amazing. And remember after we, it must have been about a month or two after we got him and we were home with him and we had friends come over with a little baby and he goes, “Ah baby. I want baby. I want baby.” And I’m like, “I’m sorry. I can’t help you out there.” And then three months after getting home with him we’re giving him what he wants. Little miracle.

I assume you, Rebecca, and the baby will not travel to the landing. When do you anticipate Randy will be able to see the baby for the first time?

Randy: We have such good luck at landing at KSC, I’d hate for them to make that trip and have us land somewhere else.

Rebecca: Probably be the day after you land.

Randy: As soon as possible. I will look forward to that landing and Scorch to make it nice and safe. Probably more than anybody has in the history of the space shuttle program.

Well that’s the last question I had. Anything else you want to add? Or that we didn’t cover that you would like…

Rebecca: No. Just I think we’re very appreciative of NASA and all the people here that have been so supportive and that have just really offered up help and everything from helping us out with our son to coordinating things while Randy’s up there and getting me to the launch and helping out with me at the launch and we’re just very appreciative of all that NASA has done for us too and all the people here.

Randy: With her being the hardworking NASA employee that she is, still working this week, her last day is going to be Friday and I go into quarantine on Monday so everybody that’s been here at JSC that ‘s been helping her out a lot during the pregnancy and helping her while she’s been pregnant and sick a bunch so we appreciate that too.

It’s an amazing story. Congratulations. Thanks again.
› Back To Top