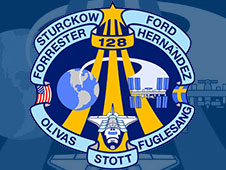 The STS-128 patch symbolizes the 17A mission and represents the hardware, people and partner nations that contribute to the flight. Image: NASA

The International Space Station now has the people (six astronauts from four countries), the place (three laboratories, 220 miles up) and the time (24/7) for science. The STS-128 mission is going to provide it with more science to do.

With the previous mission, the Japanese Kibo laboratory complex was completed and two experiments installed on its new porch. With the United States’ Destiny laboratory, the European Space Agency’s Columbus laboratory, and the projects attached to the station’s exterior, there are now 20 research facilities inside the space station and eight experiments going on outside.

But there’s still room for more. When space shuttle Discovery next visits the space station, it will be bringing more equipment for the astronauts to put to use inside those laboratories, as well as other equipment to help the station keep up with the increased demand for air and exercise that came with its increase in crew size earlier this year.

“Now that we went to the six-person crew and only have seven more shuttle flights, our main aim for the shuttle program is station utilization,” said Tony Ceccacci, the mission’s lead space shuttle flight director. “Since we are down to our last few shuttle flights, it is critical to maximize our ‘up mass’ capability to ensure we get all the required equipment and hardware to support continued station operations.”

To accomplish that, Discovery will be carrying the Leonardo Multi-Purpose Logistics Module. A sort of moving trailer for spaceships, the logistics module provides the shuttle a way to get all the items that belong on the inside of the station but don’t fit inside the space shuttle’s cabin into space. In this case, that’s about 15,200 pounds worth of cargo.

A lot of that’s just basic necessities – clothes, computer hardware, first aid supplies. But mixed in with it are two racks of equipment that will provide the crew with more ways to do its real daily work: science.

First, there’s the Materials Science Research Rack 1. As the name would suggest, it’s to be used for the study of materials; metals, glasses, crystals, ceramics and more will be mixed, melted, solidified and (in the case of crystals) grown in the rack to allow scientists on the ground to gather more data about how the processes work without the interference of gravity. 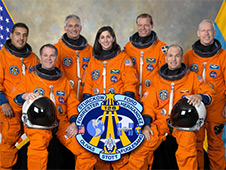 Attired in training versions of their shuttle launch and entry suits, these seven astronauts take a break from training to pose for the STS-128 crew portrait. Image: NASA

If it’s not covered by the materials rack, there’s a fair chance it will be by the new Fluids Integrated Rack being delivered inside the logistics module. Colloids, gels, bubbles, boiling and cooling are just a few of the long list of areas astronauts will study.

And of course, with all the additional science being done on the station, the crews will need more room in which to store the fruits of their labor. So Discovery also will bring up a second Minus Eighty Laboratory Freezer for ISS – or MELFI, as it’s known.

But there’s also the science of living in space to consider, which is where the other equipment being brought up comes in: a new treadmill, a new crew quarters compartment and a new air revitalization system.

The importance of the latter should be pretty obvious. The air revitalization system removes from the air the carbon dioxide the crew is constantly breathing out, making up for the lack of trees in space. The crew doesn’t have to do anything more than breathe (and perform occasional maintenance) to participate in that experiment, but the experience gained on the ground in its development and the opportunity to prove that the concept work outside the Earth’s atmosphere is invaluable.

The same goes for the treadmill. It’s essential that all six crew members at the space station are able to get the exercise they need to prevent the bone and muscle loss that occurs when you don’t have gravity weighing you down. And having a space of your own – to sleep in and store personal items – may seem like a small thing, but psychologically it makes a big difference.

All of these elements and the others that go into living in space, according to the STS-128 Commander Rick Sturckow, are what NASA will build on as it moves into the next phase of space exploration.

“My hope is people will look back and say we really learned a lot from building and operating the space station, and we could have never done what we’re going to do in the future if we hadn’t had the space station program,” Sturckow said. “They’ll look back, and it probably won’t be the same exact hardware, but we certainly learned a bunch of lessons from the hardware that we are living with every day in space.”
› Back To Top