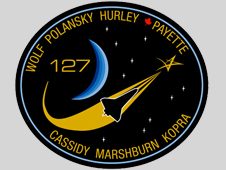 The mission insignia for STS-127 - the 32nd construction flight of the International Space Station (ISS) and the final of a series of three flights dedicated to the assembly of the Japanese "Kibo" laboratory complex. Image: NASA

Although they will be installing a one-of-a- kind porch in space, the astronauts of space shuttle Endeavour's mission STS-127 won’t have time to sit back and relax. Any way you look at it, STS-127 is a full mission.

For one, it’s scheduled to be 16 days long. That’s not the longest mission a space shuttle has flown, but it’s only the second time that astronauts have gone into a mission planning to stay in space for that long.

“The first 15 years of flying shuttle, a long mission was a week,” said lead Shuttle Flight Director Paul Dye. “We’d go up and we’d do our task and we’d come on down. Nowadays, we basically are using the shuttle in the final stages of assembly for the space station, the way that shuttle was originally conceived. To me, that’s pretty exciting.”

And with length has come complexity.

“I’ve worked in some capacity in every space station mission since the beginning,” said lead Station Flight Director Holly Ridings. “It’s been amazing. But I was joking the other day that I can remember when the really big, exciting thing we had to do on orbit was turn the heaters on the Z1 truss on and off to make sure we didn’t use too much power.”

Daily life at the station has gotten a bit more complicated since then. The station’s increased in living space alone by 45 percent in the past two years, and the number of astronauts living there will have doubled by the time space shuttle Endeavour arrives at the station. “You start out there, and today you have a complex that’s roughly the size of a five-bedroom house, and you can move up and down the truss on the robotic arm that walks and can move on a railcar,” Ridings said. “And we’ve added all the international partner modules – you’ve got different languages and cultures. We really have come a long way.”

But there’s still a lot to get done at the space station before its main source of supplies and equipment – the space shuttle fleet – retires. And that means the shuttle crew – Commander Mark Polansky, Pilot Doug Hurley and Mission Specialists Christopher Cassidy, Tom Marshburn, Dave Wolf, Julie Payette of the Canadian Space Agency and Tim Kopra, who will be trading places with station Flight Engineer Koichi Wakata of the Japan Aerospace Exploration Agency (JAXA) – has a lot on its agenda. For instance, they’re signed up to perform five spacewalks while they’re there; again, that’s not a first, but it’s only the second time that so many have been planned for a station mission. 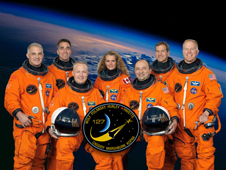 Attired in training versions of their shuttle launch and entry suits, the STS-127 astronauts take a break from training to pose for the crew portrait. Image: NASA

Endeavour will arrive with a cargo bay full of work for the crew’s four spacewalkers – orbital replacement units and new batteries for the station’s oldest solar array. And some of their work will be waiting for them on the station’s truss – cargo and payload attachment systems. But the main event will be the installation of the new Japanese hardware.

Meanwhile, inside the shuttle and station, things will be just as busy for the robotic arm operators. All three of the available robotic arms will be put to use, sometimes all on the same day. The shuttle’s Canadarm and the station’s Canadarm2 will be put through their regular paces for surveys, unloading cargo and moving equipment and spacewalkers around, and the new Japanese robotic arm will be making its debut to transfer science experiments – it’s been tested since it arrived on the STS-126 shuttle mission in November 2008. Four spacewalks and a great deal of the robotics work will devote some time to installing and outfitting the final pieces of the JAXA’s Kibo laboratory – its external facility, which will provide the Japanese a way to expose science experiments to the extreme environment of space, an exposed experiment logistics module for storage and some experiments to get it started.

“It’s certainly really exciting for JAXA,” said Polansky. “For them, this is the last of their hardware that’s going to be permanently attached to the space station. This completes their series.”

This mission also steps up the involvement of the Japanese flight controllers on the ground, as it’s the first time they’ll be operating their own mechanism. With the exception of the Zvezda service module, every module on the space station is (or in the case of the Kibo logistics module, was) connected to a U.S. module, so all use the U.S. standard common berthing mechanism to connect. The Kibo external facility will never need to be connected to anything but a Japanese-built module, and so the Japanese were free to use any berthing mechanism they wanted.

“Before, even when we had pieces of hardware that were built by someone else, we have, here in the U.S. control center, still maintained a lot of the technical leadership,” Ridings said. “In this case, they truly have technical leadership for some of the things that must work to make the mission a success. It’s unique.”

In fact, it’s a banner flight for all the international partners, as all five space agencies – the United States, the Russian, the Canadian, the Japanese and the European – will have representatives at the space station when the shuttle arrives, in addition to the six extra Americans and one extra Canadian Endeavour will deliver. Polansky said just having all those nations represented and working together toward common goals is a huge accomplishment.

“I don’t think that, as a global community, we get the credit we should for doing something like that and what it means to set that kind of example,” he said. “Countries that have, historically, had a lot of differences and even today have some tensions, politically – when it comes to the arena of space, we’re somehow insulated from all that. On our level, it’s simply figuring out how to get the job done. And it’s not just a job like you’re constructing some building here on Earth. You’re doing something in an extremely hostile environment.” In fact, Ridings said that not only does everyone work together, but the mix of different perspectives, philosophies and resources actually works to the station’s advantage – not to mention the people who are a part of its operations.

“I think my world view would be very different if I’d not had the opportunity to work at a technical level on this incredible goal with people of different cultures and countries,” she said. “That’s been the best part.”