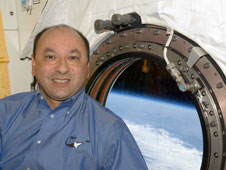 STS-127 Commander Mark Polansky is pictured near a window in the Kibo laboratory of the International Space Station while space shuttle Endeavour remains docked with the station.

NASA astronaut Mark Polansky, commander of the STS-127 space shuttle mission to the International Space Station, shared the final weeks of his training on Twitter. Polansky invited followers to submit questions that he and his crew answered from orbit during the mission, which launched in July. Questions were submitted in the form of a video, posted to YouTube, and a link to the video sent to Polansky's twitter account at: http://twitter.com/Astro_127.

Questions selected to be among those Polansky answered from space, live on NASA Television, were announced on his Twitter feed each week.

1. What's the best thing about being in space? - Answer
2. What would happen if you were to fly into a black hole? - Answer
3. While you’re in space, what do you do in your spare time? - Answer
4. Do you like your job being an astronaut? And what’s it like living in space? - Answer
5. If you’re in a spacesuit, especially on an EVA, and you have to sneeze, how do you deal with that, especially if it splatters? Also, if your nose itches while you’re in a spacesuit, how do you deal with that? - Answer
6. Can you describe what an astronaut might hear in space? - Answer
7. My family is going to Florida to watch the STS-127 launch. What will you be doing while we are watching the launch? - Answer
8. What do you see when you look at Earth from space, and how do you feel? - Answer
9. What type of experiments will you be doing when you get to the ISS? - Answer
10. How do you feel being in a selective group? - Answer
11. Would you like to go in space with your family if it could be safe enough? - Answer