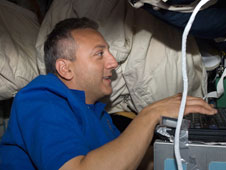 Astronaut Mike Massimino became the first human to tweet from space on his final trip to repair the Hubble telescope. It was no contest, however, that he recently also became the first astronaut to reach one million followers on Twitter (@Astro_Mike).

And who says, “In space, no one can hear you tweet?”

On April 1, 2009, it was no fool’s joke that an astronaut joined the Twitter verse. Massimino launched his Twitter to share his space training experience in chirps of no more than 140 characters in length at any given time.

In about two weeks, more than 70 thousand followers were listening. Soon after his launch aboard the space shuttle, he reached 200,000 followers.

Massimino’s mass following nearly doubled after he sent his first tweet from space sharing visual tidbits on his encounters from orbit few humans have ever seen.

But through his eyes, now more than a million people on Earth are getting a glimpse of what living and working in space is like. Massimino tweeted not only on carrying out specific mission activities like shaking lose a bolt during a spacewalk but also on wishing on shooting stars that streaked across India below him, seeing 16 sunrises in 24 hours and eating floating chocolates. 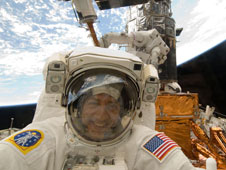 Astronaut Mike Massimino, STS-125 mission specialist, is pictured as he peers through a window on the aft flight deck of the Earth-orbiting space shuttle Atlantis during the mission's fourth spacewalk. Credit: NASA

As Massimino approached the one million mark last week, he tweeted, “getting close to a million,” and in less than an hour, he surpassed the mark by a few thousand. According to various twitter statistics, Massimino’s Twitter is ranked 139th by number of followers across all users and is ranked first in Houston, home of NASA’s astronauts.

“I cannot believe we got to one million followers,” said Massimino. “I am thrilled that so many people have been following and responding with such wonderful comments.”

While Twitter and the overall medium that is known as social media is sprawling, there’s a purpose and deeper meaning of having one million followers.

“I tweet because I feel very lucky to have, what in my opinion, is the best job in the world,” Massimino said.

And his followers agree.

“I have learned that there are so many people around the world who really love the space program and have a heartfelt interest in space travel – just like me.”

Some followers add they follow because they seek current space information, more understanding on space exploration and a unique perspective direct from the source that is found no place else on this world.

One follower even admitted enjoying Astro Mike’s “weekend tweets” like the one when he dropped a bag of groceries, forgetting that it won’t float, on adjusting to gravity soon after his return to Earth.

Micro-blogging from microgravity is trending among astronauts as popular topics are on Twitter.

About a dozen astronaut colleagues have joined Massimino and his million plus followers where the bird is the word and are answering the question: “what are you doing?” They offer varied perspectives of both training on Earth and flying in space. Among the NASA astronauts now active on twitter:
More astronauts flying in space and training on Earth are expected to debut on twitter in the near future. All NASA astronauts active on twitter can be followed at @NASA_Astronauts: http://www.twitter.com/nasa_astronauts
› Back To Top