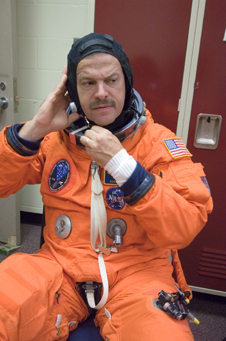 Q: The final servicing mission to the Hubble Space Telescope was on track to fly in 2008 until unforeseen events in space prompted new plans. STS-125 astronaut and mission Commander Scott Altman is here to update the plans to upgrade Hubble. What happened on orbit back in September that postponed your, your planned launch?

A: Well, that was really an interesting time and I really got to start the month before to explain it because we were rolling up to launch, everything was looking good, and then Hurricane Ike blew in and shut everybody down for a week. We all sort of bailed out, hunkered down in different places, but after the storm went through JSC was in good shape, we came back, we started looking at things, and we started rolling towards the flight again, and it felt good to be back on track and lookin’ for the flight. And then, as we got to two weeks out, we got the word that on orbit a box, a series of boxes actually—in the way that the scientific data comes down to the ground, had failed. Its primary side had been working for 18 years, but that channel failed so NASA switched over to the other side, side B from side A, and eventually was able to start getting data down again, but then we were presented with a problem: should we fly and do the repairs to a telescope that now only had one way of getting data down to the ground, and if that failed the telescope wouldn’t be able to do science any more? So they looked at could we fly a spare and replace that and bring back the full redundancy to have two channels available to bring that scientific data down to the ground.

Can you tell us why the Science Instrument Command and Data Handling system is, is so important to, to Hubble operations?

You know, the big thing about Hubble are the discoveries that it’s made and its ability to look out that 13-and-a-half billion light-years, pull all that in and take us places we can’t actually go. But all that information comes down through that series of boxes, the scientific instrument command and data handler. Basically, it’s the formatter that takes the information and puts it in a package that can be sent to the ground on the communication relays. If that goes out, now none of those scientific discoveries, none of that, those pictures of galaxies, are able to get through and come down to the ground. Basically, the scientific instruments aren’t functioning if they can’t get the data down to the ground, so it stops us in our tracks if we don’t have it.

What have the Hubble scientists and engineers had to do to get a replacement unit ready to fly?

Well, you know, Hubble’s been up there 18 years. When they launched it they planned for servicing missions and one of the things they thought might need to be fixed or replaced at some point is this set of boxes, so they’re all built in a nice little EVA-replaceable package that hangs on a door in one of the bays on the top part of the telescope. So it was built to be replaced. However, it was launched 18 years ago and it’s been workin’ fine so, they had a spare, and when we first heard this part had gone down they said, OK, well, we’ll stop and fly the spare. Turns out the spare had kind of been in storage for 18 years; parts of it had been being used, but they had to reassemble it into a flight unit and then test it, and that took some time. The last seven months have basically been packed with them getting that spare from being in cold storage, you know, for 18 years and making us feel confident that when we replace it, it will work. 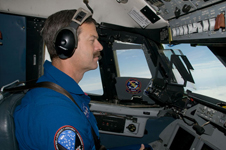 Can you tell us how this extra task has impacted the overall plan for this mission’s spacewalks; have there been any tasks removed and, and can you handle everything from before plus the new job?

You know, going into the flight back in September, right before we cancelled, I felt we had a completely full timeline. We were going to be able to accomplish what we had on our plate but it was going to be busy and tight. And now something else has been added, so it has caused us to rearrange our tasks. We’re still trying to get everything done. It’s going to be challenging, trying to fit all that work in, so one of the tasks we’ve rearranged, a task that we thought we might be able to get done in one day, that’s the repair of the Advanced Camera for [Surveys], the ACS, but we had kept some time on the last day to finish that repair if we needed it. Now it looks like we’ll only have the time on that third EVA to repair the Advanced Camera for Surveys. So, if we don’t get it all done then, and the next day goes well, that work we’ll just leave behind and we won’t have that repaired. We are going out with a positive attitude that we’ll do that repair and we’ll do what we can to get it done in one day, but we know things can be unexpected. If it doesn’t, that’s the lowest priority that would drop off our list because the scientific instrument command and data handler is the top priority and it now moved into the first day EVA so we get it done as soon as possible so the ground can check it out and make sure everything looks good.

Tell us how you and your crewmates have taken advantage of this extra preparation time.

It’s been seven months from being ready to go, or at least we thought, now actually getting close to fly in May and there was a little bit of time where we mourned a little bit for not going right away but, one of the challenges I put to the crew and everybody else, and the Goddard folks, is that we all use our time wisely. We had an opportunity to kind of review, were we really as good as we thought we were: and so we’ve tried, done that, we’ve looked at the procedures. I think we’ve gotten better; we’ve had a little more time in the pool, and the challenge has been not to just plateau and stay at the same place but try to take ourselves up to the next stop, and, as I’ve looked back at it, we found things that we would have had questions about on orbit if we’d flown in October that now we’ve resolved and moved forward on, and I think we’re just that much better prepared for actually flying and getting as much as we possibly can done in space.

And, and it’s actually almost turned out to be a bit of a blessing in disguise…

I think that’s true. It would have been much harder to get all the work done with where we were. I think we were ready but I can safely say we’re better now so I’m looking forward to it.
› Back To Top