Grow Text SizeShrink Text Size
Mission Accomplished: Leaving Hubble Better Than Ever
Take one space shuttle, seven highly trained astronauts, tons of equipment, and one legendary orbiting telescope and you have the 5.3 million-mile odyssey that was the final servicing mission for NASA's Hubble Space Telescope. 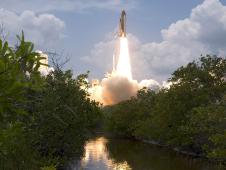 Image above: Banks of trees and bushes provide a frame for the launch of space shuttle Atlantis from Launch Pad 39A at NASA's Kennedy Space Center in Florida. Image credit: NASA/Sandra Joseph-Kevin O'Connell
› View larger image 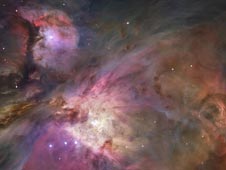 Image above: In one of the most detailed astronomical images ever produced, NASA's Hubble Space Telescope captured an unprecedented look at the Orion Nebula in January 2006. More than 3,000 stars of various sizes appear in this image. Image credit: NASA
› View larger image 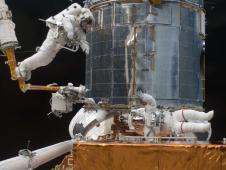 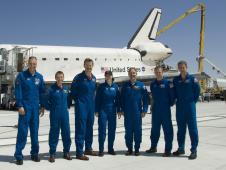 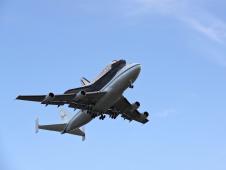 Why is Hubble important?

After months of training and a seven-month postponement, the STS-125 crew's mission got under way with an on-time launch into a brilliant-blue Florida sky. The May 11, 2009, liftoff of space shuttle Atlantis took place at 2:01 p.m. EDT from Launch Pad 39A at NASA's Kennedy Space Center. As if to say, "Come on up!" the 19-year-old Hubble was passing directly over Kennedy at the time of the launch. The mission ended later than planned at the backup landing site, Edwards Air Force Base in California. Lingering tropical rain in Florida produced three consecutive days of wave-offs at Kennedy before Atlantis made an 11:39 a.m. EDT touchdown at Edwards on May 24.


The mission's major upgrades to Hubble and what they provide:

Wide Field Camera 3 - Hubble's new panchromatic camera will allow astronomers to better observe galaxy evolution, dark matter and dark energy.
Cosmic Origins Spectrograph - The most sensitive spectrograph ever flown on Hubble, the new instrument will peer further into the universe than ever before in the near and far ultraviolet ranges.
Advanced Camera for Surveys - Now repaired, it's one of Hubble's primary cameras, which stopped working in 2007. It's responsible for some of the most famous images from Hubble.
Space Telescope Imaging Spectrograph - Inoperable since 2004, the repaired instrument reveals information about planets, comets, stars and galaxies.
Science Instrument Command and Data Handling System - Replacement of the unit that failed in September 2008, returns full function for sending information and receiving commands.
Fine Guidance Sensor 2 - Replaced, it is one of three sensors that help point and lock the telescope on targets.
Rate Sensor Units - The six new gyroscopes in these units work with the Fine Guidance Sensors to help precisely point the telescope.
Battery Module Units - Replaced, they power Hubble when the solar arrays are out of the sun's reach.

The tasks ahead of the crew were monumental: conduct spacewalks on five consecutive days that would leave the telescope upgraded and sending back even more spectacular images well into the next decade.

To mitigate the risk to the crew should Atlantis sustain damage on ascent or during the mission, space shuttle Endeavour was stationed at Kennedy's Launch Pad 39B as a standby rescue vehicle. A unique risk was the orbit in which Hubble resides. It contains a higher level of debris that potentially could have struck Atlantis during the mission. Another factor was the lack of "safe haven" normally provided by the International Space Station on other missions.

Both before and after the capture and servicing of Hubble, the astronauts conducted careful inspections of Atlantis' exterior using the shuttle's 50-foot-long orbiter boom sensor system attached to its 49-foot-long robotic arm. No significant damage from either launch or the days in space was found. Once mission managers gave Atlantis a clean bill of health, Endeavour was released from its standby duties.

The heart of the servicing mission -- the capture of Hubble, five spacewalks and release of the refurbished telescope -- spanned flight days three through nine. By the end of the last spacewalk, all the mission objectives to improve Hubble's view of the universe and extend its life had been accomplished.

Two days after launch, Atlantis caught up to Hubble 350 miles above Earth. It was up to Altman and Johnson to bring the shuttle close enough to the telescope so that McArthur could use the robotic arm to capture it and gently place it on a rotating work stand in the payload bay. From there, the pairs of spacewalkers would conduct their work.

Mission Specialist Mike Massimino, or Astro Mike as he is known, gave the public a rare look inside his training and the mission through his updates on the popular online social network Twitter. Here are a few of his entries:

From orbit:
"Launch was awesome!! I am feeling great, working hard, and enjoying the magnificent views, the adventure of a lifetime has begun!" - May 12

"At the end of my spacewalk, I had time to just look at the Earth, the most awesome sight my eyes have seen." - May 18

"Our fifth and final spacewalk is over, everyone is happy, time for a crew dinner to celebrate!" - May 19

"Getting ready for bed, sleeping in space is cool, tie down your sleeping bag and float inside of it, very relaxing." - May 19

"As I closed my eyes to sleep last night I thought "these eyes have seen some beautiful sights today." - May 20

"Just saw Orion’s nebula in the night sky -- the sights make all the hard work and risk worthwhile for me." - May 20

Both Grunsfeld and Massimino had been to Hubble before, and each was paired with a first-time spacewalker. Grunsfeld teamed with Feustel on the first, third and fifth spacewalks and Massimino worked with Good during the other two.

Each spacewalk was planned to last about 6 1/2 hours, but most lasted between seven and eight hours.

While not without some troublesome moments, the spacewalkers overcame any difficulties to accomplish all the repairs and upgrades of the challenging mission. An onboard IMAX camera captured their work for a Hubble 3-D movie due to debut in 2010.

The days before landing provided an opportunity for the crew to have some needed off-duty time, as well as a chance to speak to U.S. President Barack Obama, the crew orbiting on the International Space Station, reporters back on Earth, and to testify before a U.S. Senate committee -- a first-time event from space.

At the completion of the final spacewalk, the moment came when human hands had touched Hubble for the last time. The STS-125 crew left the telescope ready to dazzle the world for years to come, with more scientific discoveries and stunning images now possible because of its improved view that stretches from our solar system to the far reaches of the universe.
Cheryl L. Mansfield
NASA's John F. Kennedy Space Center
› Back To Top