Hope Takes Flight on Shuttle Discovery
The cargo aboard the space shuttle Discovery on mission STS-124 already has traveled halfway around Earth, more than 10,000 miles over land and sea. It’s now ready for the culmination of its 23-year journey to the International Space Station. 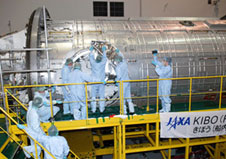 In the Space Station Processing Facility at NASA's Kennedy Space Center, members of the STS-124 crew look over the scientific airlock in the Kibo pressurized module. Image credit: NASA/Kim Shiflett

STS-124 will launch the main segment of the Japan Aerospace Exploration Agency's – or JAXA’s – station laboratory. Kibo’s Japanese Pressurized Module, or JPM, is 14.4 feet in diameter and 36.7 feet long, so big that it barely fits inside Discovery's payload bay.

The bus-sized module will be the station’s largest laboratory and will be the second component of Japan's laboratory complex to fly to the station. The first, the Japanese Experiment Logistics Module, was launched in March on shuttle mission STS-123.

The Kibo pressurized module weighs in at 32,000 pounds. It’s so large that the shuttle’s Orbiter Boom Sensor System was left at the station during the last mission. There’s not room in Discovery's cargo bay for both the boom and the lab.

And the module is so heavy that only its primary set of avionics systems can be launched inside it. The second set was launched in the logistics module delivered on STS-123 so that it will be available, if needed, when Kibo is activated.

“Kibo is just a beautiful piece of work,” said lead shuttle flight director Matt Abbott. “I know the Japanese space agency had an element installed on STS-123, but this is really their pride and joy. This module is amazing.”

“It’s going to be a world-class laboratory,” said astronaut Mark Kelly, Discovery's commander. “It’s its own little spacecraft, in the sense that it has an environmental system, electrical system, its own computer system, its own robotic arm. It’s got a lot of capability, and I’m hopeful that over the years that laboratory produces significant discoveries in the fields of chemistry, physics, material science, life sciences. It certainly has that potential.” 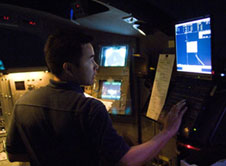 “This is a big step for the Japanese community, the science community especially, because that means that they can start their own science," said Discovery Mission Specialist Akihiko Hoshide, a Japanese astronaut. Hoshide will install the module using the space station’s robotic arm and will be the first to float inside the lab once it is opened.

On Earth, STS-124 will mark the first time the JAXA flight control team will activate and control a module from Kibo Mission Control in Tsukuba, Japan. JAXA is scheduled to take over final activation of Kibo on the fifth day of STS-124, the day after the module is installed.

“That’s a big day for Japan,” Hoshide said. “We’ll be doing vestibule outfitting, which is basically hooking up all the jumper connections between Node 2 and the pressurized module for power signals, data cables, fluid lines, all that stuff. Once that’s done we will be activating the main computer in the pressurized module from our laptop computer inside the station – we call that the initial activation.

“Then, once the computer’s activated, the Mission Control Center in Tsukuba Space Center can start commanding, so we’ll hand it over to them. They will start doing the final activation of the module.”

Hasbrook has been working with JAXA toward this goal since 1999, and has watched as NASA ground control teams developed relationships with their JAXA counterparts. It’s been a learning experience for both sides, she said, but a rewarding one.

“You really see the rapport developing between the flight controllers of each nation’s control center,” Hasbrook said. “That’s been a lot of fun to watch, the development of that and the evolution. In both cases we started out with young flight controllers, not that experienced in their system, and on the Japanese side, they hadn’t done manned spaceflight before. Now they’ve done the planning and the training and they’re getting ready to fly.” 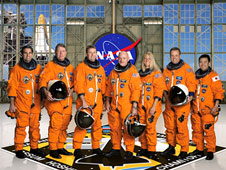 The STS-124 timeline will vary slightly from those of recent shuttle flights. For example, Discovery's heat shield inspections will occur later than usual. Normally the boom sensor system is attached to the shuttle robotic arm on the second day of a mission to ensure the shuttle wasn’t damaged during launch.

Since the boom is stowed on the station, Discovery's crew will use only cameras at the end of the shuttle's robotic arm to conduct an inspection before the shuttle docks to the station. Even that will be limited, however, since the camera on the arm’s elbow joint, which helps the astronauts steer the arm, must be strapped down to make sure it doesn’t contact the Japanese module during launch.

“We’ll be doing some survey of the upper surfaces of the wings, primarily, but not much more than that because the reach is very limited for the arm in that configuration,” Abbott said. “So we won’t be getting the kind of information that we usually get then. But later on we will do a focused inspection using the boom, after we get docked.”

Discovery will receive a thorough inspection after it undocks. An extra day has been added to the STS-124 schedule after undocking to give ground teams ample time to review the data before landing.

In addition to Commander Kelly and Hoshide, the STS-124 crew consists of Pilot Ken Ham, Mission Specialists Karen Nyberg, Ron Garan, Mike Fossum and Greg Chamitoff. Chamitoff will replace Expedition 16/17 Flight Engineer Garrett Reisman and remain aboard the station as a member of the Expedition 17 crew. Reisman will return to Earth with the STS-124 crew.
› Back To Top