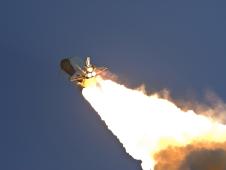 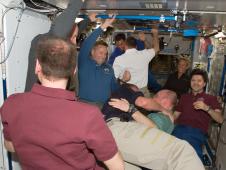 Image above: The STS-124 and Expedition 17 crew members greet each other shortly after Discovery docked to the International Space Station and the hatches opened. Photo credit: NASA/JSC
› View High-res Image 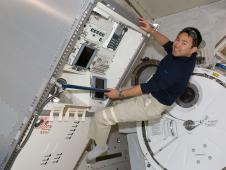 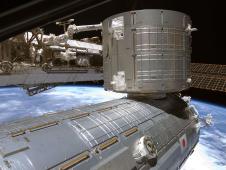 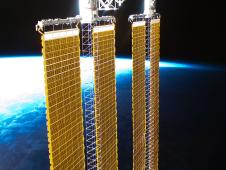 
After a wait of more than two decades, "hope" arrived at the International Space Station on June 3, 2008, just three days into space shuttle Discovery's STS-124 mission.

Using the space station's robotic arm, Mission Specialists Akihiko Hoshide and Karen Nyberg slowly and carefully maneuvered the 32,500-pound Japanese Pressurized Module out of Discovery's payload bay. More than two hours later, as Earth rolled by below, Hoshide installed it on the left side of the station's Harmony node.

"We have a new hope on the International Space Station," said Hoshide, who represents the Japan Aerospace Exploration Agency.

The Pressurized Module is the largest piece of hardware in the Japanese Experiment Module known as "Kibo," or hope. After 23 years in the making, Japan's contribution to the International Space Station is finally taking shape in orbit.

Discovery's STS-124 mission was the second of three shuttle flights required to deliver the entire Kibo complex to the station.

Commanded by astronaut Mark Kelly, the seven-member crew started the two-week mission May 31 with a spectacular late-afternoon liftoff from NASA's Kennedy Space Center in Florida. Discovery roared toward orbit at 5:02 p.m. EDT and started its two-day orbital pursuit of the space station.

On June 2, with Pilot Ken Ham at the controls, the orbiter linked up with the space station as the two spacecraft flew above the South Pacific. Later that afternoon, astronaut Greg Chamitoff took the place of ISS Flight Engineer Garrett Reisman, who had served three months aboard the station.

Mission Specialists Mike Fossum and Ron Garan conducted the mission's first spacewalk the next day, which marked the 43rd anniversary of astronaut Ed White's first U.S. spacewalk. During their six-and-a-half-hour excursion, the spacewalkers prepared the laboratory module for installation. They also cleaned and inspected the station's starboard Solar Alpha Rotary Joint, one of two such joints which help the power-generating solar arrays follow the sun.

The Japanese Pressurized Module was officially open for science the following day.

"It has been 20-plus years to get this module up in space," Hoshide said when he unlocked the laboratory's hatch. "It looks empty, but it's filled with dreams."

Earlier that morning, space station astronauts successfully repaired the toilet system in the station's service module by replacing a pump carried to orbit aboard Discovery.

The fast pace of the mission continued on the sixth flight day with another spacewalk performed by Fossum and Garan. Among the many assignments completed during their seven-hour spacewalk, the two astronauts outfitted the Pressurized Module with a pair of television cameras. At the end of the excursion, Fossum inspected the port Solar Alpha Rotary Joint.

Flight day seven was another busy day for the joined shuttle and station crews. Nyberg and Chamitoff used the space station's robotic arm to remove Kibo's 9,500-pound logistics module, which was delivered to the station on the STS-123 mission, from its temporary home atop the Harmony node to its permanent home on top of the Pressurized Module.

The Japanese robotic arm, which Discovery also brought to the station on this flight, was put through its first workout the following day. The arm's end effector pitched down slightly, enough to confirm the arm was working properly and leave room for Fossum and Garan to complete work on it during the mission's final spacewalk on flight day nine.

During that six-and-a-half-hour trek on June 8, Fossum and Garan accomplished everything on their to-do list as well as some "get-ahead" tasks. They exchanged a depleted nitrogen tank assembly for a new one, removed thermal covers and launch locks from the newly delivered Kibo hardware and reinstalled a repaired television camera onto the station's left P1 truss. Fossum also retrieved samples of a dust-like substance from the left Solar Alpha Rotary Joint for analysis by experts on the ground.

Crew members from space shuttle Discovery and the International Space Station said goodbye and closed their respective hatches on June 10, ending the docked portion of the STS-124 mission.

The next morning, Discovery undocked from the station at 7:42 a.m. EDT and Ham guided the shuttle through the traditional "fly-around" before finally separating from the orbiting outpost. A final inspection of the orbiter's heat shield rounded out the day's work.

Discovery's mission concluded June 14 with a picture-perfect landing on Kennedy's Runway 15, gliding to a touchdown right on time at 11:15 p.m. EDT.

"It's great to be here on the runway in sunny Florida and to bring Discovery back in really good shape," Kelly said before the astronauts departed the runway. "We installed a Japanese lab that will allow a lot more science on the station, we did three spacewalks, and we exchanged the crew of the space station. It was really an exciting mission."