Grow Text SizeShrink Text Size
All Aboard for STS-123: The Station Goes Global
Space shuttle Endeavour’s next flight to the International Space Station will truly be an international endeavor.

“This is the first flight where we actually have all the partners,” said Dana Weigel, the lead station flight director. “It’s not just ‘a Japanese flight,’ or ‘a Canadian flight.’ This flight truly is the first time that it requires every single partner actively participating to make everything work. I think that’s a great milestone.” 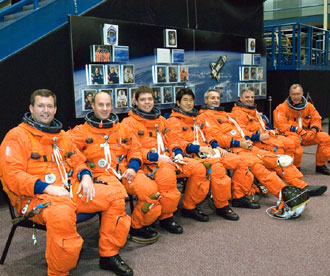 Topping the list of milestones is the delivery of part of the Japan Aerospace Exploration Agency’s module, marking the beginning of the agency’s presence on the station. The Japanese Experiment Logistics Module, Pressurized Section – called the JLP – is really just the warm-up act for JAXA. It will contain critical avionics and serve as a storage area for experiment materials. At 14.4 feet in diameter and 12.8 feet in length, it is the smaller of two pressurized Japanese modules. Combined with other elements, they will make up Kibo, the station’s Japanese complex, named for the Japanese word for hope. Kibo’s main facility and its robotic arm are scheduled to launch on the following shuttle mission, and a "front porch" that will allow astronauts to expose experiments directly to space will be delivered later.

But small or not, what the module represents is big.

“Many people have worked many years to come to this point,” JAXA astronaut and Mission Specialist Takao Doi said. “With this mission, the real Japanese manned space program can begin.”

Doi will be the first person to venture inside the module, which will be installed on the zenith – or upper – side of the Harmony Node installed last year. He said he’s already thinking about how he’ll mark the moment. His commander, Dominic Gorie, said he’s looking forward to hearing it.

“That’s going to be a very exciting, rewarding part of the flight,” Gorie said. “To see Takao’s face, knowing that he’s a JAXA astronaut, delivering their first piece of hardware, is going to be really exciting.”

But all that excitement will come early on in the mission. On the first spacewalk, mission specialists Rick Linnehan and Garrett Reisman will go outside to prepare the module for installation, and Doi will install the module from inside using the shuttle’s robotic arm.

“That will kind of be the big climax at the beginning, but we’ll be done by the end of flight day 4,” Lead Shuttle Flight Director Mike Moses said. “We still have 12 more days to go.”

Twelve days – not to mention four more spacewalks – is more than some missions get in total. This flight is the first to go into the mission planning to take full advantage of the Station to Shuttle Power Transfer System. Other shuttle flights have been able to use the system to glean extra power from the station and extend their flight, but the decision to do so was always made after the shuttle was in orbit.

Endeavour is launching with the expectation of staying in space for 16 days, and there are always extra days set aside in case weather or a technical problem delays landing.

“We have the potential to be on orbit for a very long time,” Moses said. “When we were building our timeline, we were talking about flight day 14 – that’s usually landing day. That’s undocking day for me. My teams are going, ‘What? We’re still in orbit?’”

After getting the JAXA module installed, the crew’s attention – at least as far as spacewalks go – will turn to the Canadian Space Agency’s newest contribution to the station, the Special Purpose Dexterous Manipulator. Dubbed Dextre by a Canada-wide naming contest, the robot, with its two small robotic arms, will attach to the station’s robotic arm, Canadarm2, and allow astronauts to replace hardware outside the station without doing a spacewalk.

It’s a complicated piece of hardware, and because it is launched in several pieces, some assembly will be required.

“It’s going to take a few spacewalks to put that thing together,” Gorie said. “It’s quite a Tinkertoy project – but much more complicated that what we’re used to as children.” 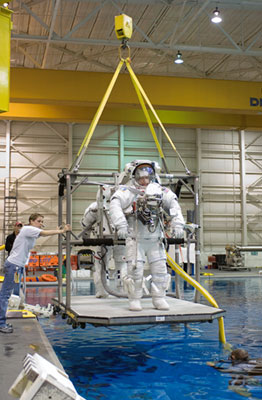 Image to left: Astronauts Michael J. Foreman and Robert L. Behnken (partially obscured), both STS-123 mission specialists, are about to be submerged in the waters of the Neutral Buoyancy Laboratory near Johnson Space Center. Foreman and Behnken are attired in training versions of their Extravehicular Mobility Unit (EMU) spacesuits. Divers are in the water to assist the crewmembers in their rehearsal, intended to help prepare them for work on the exterior of the International Space Station. Image credit: NASA

Dextre will launch as two arms, two wrist end effectors and a main body attached to a pallet. The crew will take the pallet out of the shuttle’s cargo bay and attach it to the station. Then, after the JLP work is done during the early portion of the first spacewalk, Linnehan and Reisman will spend the remainder of that spacewalk beginning the Dextre assembly. All of the second spacewalk and part of the third will be devoted to finishing the assembly.

“It’s funny – we’re the 1J/A mission, for Japanese/American,” Moses said. “But there should be a C in our title, too. If you look at our mission, Dextre requires the biggest chunk of spacewalk time. Literally, from the day we dock until flight day 9, we’re doing something with Dextre almost every day.”

The final two spacewalks of the mission will come on flight days 11 and 13. The fourth spacewalk will be used to replace a remote power control module and test a shuttle tile repair material. The repair material test was originally scheduled for Discovery’s mission last October, but was rescheduled so that problems with the station’s solar arrays could be addressed. The goal is to complete this test before space shuttle Atlantis flies to the Hubble Space Telescope in August, in case a tile repair is needed on that mission. Unlike missions to the space station, Atlantis’ crew members wouldn’t be able to wait on the station for another shuttle to bring them home if Atlantis was damaged.

And on the fifth spacewalk, mission specialists Robert L. Behnken and Mike Foreman will store on the station the boom that attaches to the shuttle’s robotic arm for heat shield inspections. The boom is being stored on orbit since the next shuttle will not have enough room to carry both the boom and the larger JAXA module in the cargo bay.

Gorie and Pilot Gregory H. Johnson will perform Endeavour’s inspection on flight day 12, before the boom is stowed, rather than after the shuttle undocks as is normal. That’s just one of the many robotic arm tasks set for the crew inside the station to do when no one is outside on a spacewalk. Of the 16 days Endeavour will be in space, robotics work is planned for 12 – in addition to the inside work needed to outfit the JLP and the outfitting work planned for Columbus, the European laboratory which will have been on orbit only a few weeks. Plus, Reisman will have some moving to do – he’ll be staying on the station after the shuttle leaves, trading places with European Space Agency astronaut Léopold Eyharts.

Still, everyone agrees that all the hard work will be well worth it.

“Everyone’s unbelievably excited,” Moses said. “Their hardware has been ready to go for years, and we’re now finally going to be able to launch it. Everybody says, ‘Wow, you guys have a busy mission … and thank you very much.”
Brandi Dean
Johnson Space Center
› Back To Top