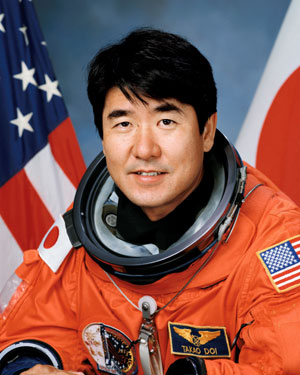 Q: This is a question that you’ve probably been asked a few times before but knowing the odds against actually becoming an astronaut. What made you want to apply to be an astronaut?

A: Well, I was watching stars when I was a kid and I still like watching stars right now. And while I was watching stars I dreamed about traveling in space visiting the center of our galaxy, exploring a globular cluster, observing a birth of stars. So I was just fascinated by mysteries of the space and what I could learn from space. This is the reason why I wanted to be an astronaut and I feel very lucky that I have been selected.

Can you tell us the story of your journey to become an astronaut and, if you would, please include your educational background and, and your professional career as well?

When I was in junior high school I started watching stars. At that time Apollo 11 mission took place, so I was watching Neil Armstrong walking on the moon. I was hooked. When I was in high school, Mars got closer to the Earth and I was observing Mars all the summer using an 8-inch telescope which I borrowed from my high school. I was hooked even more so when I entered the college, I wanted to make my own rocket so I chose to study rocket propulsion. Eventually I found a way to become an astronaut. I can say that I was fascinate, fascinated with stars and just I worked hard to keep my dream alive.

Flying in space has proven to be a dangerous endeavor. What do we gain from space flight that makes you willing to risk that danger?

I think we are opening a new horizon or a new world for mankind by flying in space. As you know, the Earth is getting smaller and smaller as the population grows and we are facing more problems such as decreasing natural resources and increasing the environmental problems. We need to have a breakthrough in order to solve these problems. Flying in space is very challenging but will give us an opportunity to have a breakthrough in science and technology in order to solve those problems. Also flying in space may provide us new home for us in the future. It’s very challenging but I think it’s worth the risk.

It’s been a while since you’ve flown. This is not your first mission. You flew on STS-87.

How do you feel about this second mission and maybe touch on a little bit the differences you’ll, you’ll encounter on this mission, STS-123 versus STS-87?

I flew the previous mission more than 10 years ago, so it seems this mission is as fresh as other first one again and this time I’m going to fly to the space station. This is a new experience for me so I’m very excited about seeing the space station and walking on board it. Also I’m going to do several new tasks such as rendezvous and docking and operating the arm. I’m really looking forward to do those new tasks.

Give us a summary of the primary goals of the STS-123/1JA mission to the International Space Station and your responsibilities during that mission. 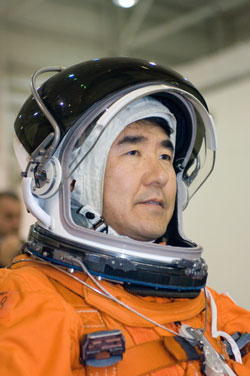 There are two primary pieces of station hardware that will be carried on your flight. One, as you mentioned, is the first of six components that make up the Japanese experiment module known as Kibo. This first component of Kibo is the Experiment Logistics Module Pressurized Section or ELM-PS. We’re going to call it the Kibo Logistics Module.

Sounds good to me.

Tell us what this module is and explain its function as part of the International Space Station.

We are going to install this Kibo logistics module on top of the Node 2. Kibo means ‘hope’ in Japanese. This Kibo logistics module contains eight racks. The seven of these racks will be transferred to JEM pressurized module when it arrives on STS-124 and five of these racks are called ‘system racks’. They are computers and electronics and hardware which is needed to activate the JPM systems. Now two of them are called payload racks so we are going to carry out the various experiments using those racks. They are the fluid physics experiment rack and the life science experiment rack. The last rack is a storage rack. We have many pieces of hardware for systems and payloads and once we attach this logistics module to the space station, it will serve as a storage section for various kinds of hardware.

The Kibo logistics module is going to be installed in a temporary location. Where will it be installed and why is it temporarily installed there?

Could you describe for us how the Kibo logistics module will be transferred from the cargo bay onto the station?

What does the Japanese experiment module, or Kibo, represent to you as a Japanese astronaut?

I started working with the Japanese Space Agency more than 20 years ago. At that time the Japanese station module project started. It has taken so many people and so much hard work to come to this point and I’m very happy being a part of this project from the beginning. It is almost the realization of the dream I have had since I became an astronaut.

Yeah. We are trained both in Japan, also in KSC also. So the logistics module was transferred to KSC couple of years ago and so we have been checking the hardware since it arrived at KSC so we know everything about inside the hardware, also outside. And in Japan we have a mockup of this Kibo logistics module so we will, we have been doing many walk-inside assembling, a kind of rack inside or removing the items from the rack or reconfiguration of the rack. So we have been doing various training in Japan.

So you actually traveled to Japan.

Speaking of Japan, what do you think is the importance is of Kibo to Japan and the Japanese people?

I can say that, that this is a small step for me but a giant leap for the Japanese manned space program. This is the first piece of the, the Japanese space station module and actually the logistics module is the first manned space facility Japan has ever launched. So I can say that with this mission real Japanese manned space program can begin. We are facing many challenges but with even greater rewards by opening the opportunity for Japanese people to go to space more freely. 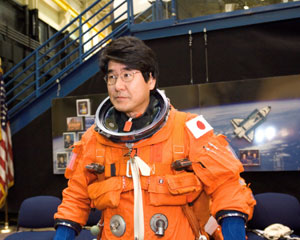 On flight day 2 the orbiter is surveyed for any damage that may have occurred during launch. Give us a brief overview of the survey process, what you’re looking for and tell us what your responsibilities are during that survey.

I’m very happy to greet our space hosts, the space station Commander Peggy Whitson, Yuri Malenchenko and Leo Eyharts. Then I would like to explore the space station because this is my first time to be on board. I would like to get to know every part of the station first because this is going to be my home in space for the next 10 days. Then after that, I like to check my flying skills in zero gravity.

As you talked earlier, flight day 4 ushers in the first of several spacewalks during this mission. During the spacewalks, the Kibo logistics module and Dextre will both be transferred from the temporary home inside the orbiter’s cargo bay to become part of the ISS. Describe in a little more detail the process for transferring Kibo, the Kibo logistics module, to the ISS. We talked about your responsibilities as earlier but this is a fairly automated process that’s, that you’re going to be monitoring. Could you explain how that’s going to work?

I explained this a little bit about this work before but I’m going to explain it again. When we unberth the Kibo logistics module first from the shuttle payload bay we are going to do that operate all manually and, as I said, Dom and I will be watching and make sure that the KIBO and any part of the robot arm will not hit any structure inside the payload bay. And then we are lifting the logistics module about five feet away from the payload bay. Then we are going to use the computer control board to transfer the logistics module on top of the Node 2. It’s a very complicated process and it’s very difficult to fly manually although we are trained to do manually in case we cannot use a computer mode. But by using a computer mode, it makes our job easier. We are just checking the camera views and the window views, to make sure that it is not going to hit any structure of the space station. Once the computer puts the logistics module closer to the Node 2 PCBM, ACBM part, then we are going into the final stage. Here we are operating the arm manually again and the margin of error is very small for this final berthing process so I have to fly the very precisely along the, the berthing corridor.

Will you have some assistance from your crewmates that’ll be, that’ll be involved with this EVA-1?

Yeah. This flight day four operation is very complex. So Dom and I will be operating the shuttle arm try to install Kibo logistic module. Also on the flight deck Mike is talking to the EVA crew members and during this EVA-1, Rick Linnehan and Garrett Reisman are working outside so two crew members are working outside and Mike is kind of conducting this EVA operation and Dom and I are working also on the flight deck operating the arm.

You talked earlier about rendezvous and docking.

What are your responsibilities during rendezvous and docking?

Yeah. I’m working with Dom Gorie and Box Johnson on the flight deck. Dom is flying the shuttle and Box is taking care of all the shuttle systems and I am kind of a time keeper so I am calling out any steps in the rendezvous or docking procedure, make sure that Dom and Box are doing their jobs correctly. So this is a really teamwork.

RPM stands for R-bar Pitch Maneuver. This is a very interesting maneuver. We are coming in between the station and the Earth and it’s a line between the station and Earth is called R-bar and when we are this R-bar we are going to start doing a back flip so the space shuttle is pitching up and up and then the shuttle is showing its belly toward the station. The reason we are doing this maneuver is that then the station crew can take pictures of the thermal protection system of the shuttle. These pictures will be examined on the ground, to make sure that no tiles on the belly of the shuttle were damaged during the launch phase. We are going through this back flip one time and this is called RPM. Then after that we are ready to go to the V-bar that is just in front of the station.

If you have some off-duty time -- there’s some in the timeline that if you -- if you had that off-duty time, what do you think you’re going to do?

What’s it like for you to know you’re a, a critical part of the largest scientific and technological endeavor ever undertaken?

First of all that I am very happy to be a part of this great project and I believe that the space station project is the greatest endeavor that mankind has ever taken. There’s no doubt about it and many people have been working on this project for such a long I’m very happy that we can come to this point.