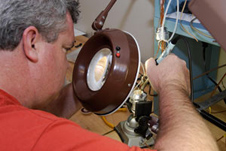 Bob Arp, an aerospace technician for the United Launch Alliance, carefully solders the pins on a connector that will be installed on the external tank to be used by space shuttle Atlantis for the launch of STS-122. Credit: NASA/Kim Shiflett 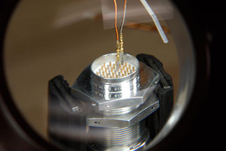 The soldering work called for a delicate touch because the 37 pins that run through the connector are extremely close together. Photo Credit: NASA/Kim Shiflett 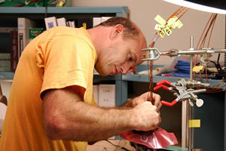 
Innovation described the space shuttle when it first lifted off its launch pad 26 years ago, and the spacecraft still requires innovations in other forms to keep it ready for orbit.

The latest ingenuity came about as NASA was trying to figure out why a connector that passes electrical signals through the wall of the external tank was acting up.

The prevailing thought is that there is some movement inside the connector that causes some of the 37 metal pins to stop touching the metal inside the sockets. This breaks the electrical current running through the connector and causes the flight computers to pick up false signals from the sensors.

The sensors gauge when liquid hydrogen inside the tank gets too low to keep running the shuttle's three main engines.

While tests were still under way to determine why the connection was breaking, a group of engineers who work on unmanned Atlas rockets already had an idea of how to fix the shuttle's issue.

James Whelan, an electrical and avionics systems manager for the United Launch Alliance's Atlas program, said a tanking test performed on space shuttle Atlantis showed a problem similar to one he worked on in 1994 with the Centaur stage of a Titan-Centaur rocket. The solution then was to permanently solder the connecting pins and the socket so the electrical current could not be broken.

There were signs that approach would work on the shuttle.

"When the tanking test led the team directly to the connector, that's when it really clicked for a lot of people," Whelan said. "That kind of came together quickly."

The electrical connector that showed problems on the external tank for Atlantis is similar to the design used on the Centaur stages that Titan and Atlas rockets use as upper stages. Able to show that the repair technique engineers had in mind had worked successfully on the 32 flights since it has been implemented, NASA allowed testing for it to be used on the shuttle.

That's where Lockheed Martin's engineers came in. They built working models of the connector and worked with the ULA team on the soldering techniques.

"The history that the Atlas folks had made a lot of sense," said Ken Reaume, a design representative for Lockheed Martin.

The effort called for extremely precise soldering to connect pins that are only fractions of an inch apart. And because it will be used on a multi-billion-dollar spacecraft carrying seven astronauts, each new joint gets careful inspection.

The work was not confined to NASA's Kennedy Space Center in Florida, where space shuttle Atlantis remains poised on its launch pad in anticipation of carrying the European-built Columbus laboratory to the International Space Station.

Much of the testing on the failed connector and on the redesigned system was done at NASA's Marshall Space Flight Center in Huntsville, Ala. Marshall engineers have a test stand that can put the connector into the same super-cold conditions it sees when the external tank is fueled on launch day. Liquid hydrogen is colder than minus-423 degrees F.

Space Shuttle Program managers at Johnson Space Center in Houston, also played a large role in deciding the direction of the repair and analyzing the broad test results.

Stephen Swichkow, NASA's external tank and solid rocket booster electrical branch chief at Kennedy, said establishing the design and getting the work done in only a few weeks showed the agency's determination and motivation.

"Normally it would take six months to a year to do the design process," Swichkow said. "And we accomplished that in about two weeks."

The new connector will be installed this week on the external tank, then launch preparations will begin again. The crew that worked on the new design will not know whether it will work for certain until launch day when the external tank is again pumped full of super-cold liquid hydrogen.

"Right now, I'm hopeful," Whelan said. "Until I hear that we've tanked and there's no problems, then I'll be excited."

In the meantime, the workers are looking at the NASA and corporation cooperation that made the changes possible as a guide to changes in the future.

"It's been great that we can kind of cross company lines," Whelan said.