Space Shuttle Mission STS-122: The Voyage of Columbus
Space shuttle Atlantis' mission on STS-122 is what everyone's been working toward: expanding the science capabilities of the International Space Station.

Over the past year and a half, solar arrays and a connecting module have been added for power and to provide a pathway to new modules. But the mission of shuttle Atlantis’ crew will mark the beginning of the culmination of all that work. 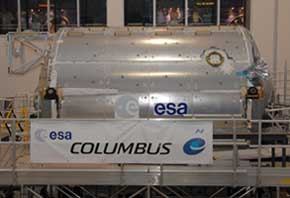 Image to right: In the Space Station Processing Facility at NASA's Kennedy Space Center, the Columbus Laboratory is positioned on a stand where it is being displayed to the media at a special showing. Image credit: NASA/George Shelton

“This is the next phase of the international mission,” said Michael Sarafin, lead shuttle flight director for STS-122. “We’re finally going to use a lot of that new capability that we’ve delivered. It really will be true utilization of the station by international partners.”

That utilization comes in the form of Columbus, a 23-by-15-feet research laboratory and the future center of the European Space Agency’s activities in space. It will be followed over the next two missions by components of the Japan Aerospace Exploration Agency’s module, called Kibo. But for now the focus is on Europe. In addition to the Columbus module itself, Atlantis will deliver experiments to be performed in orbit and two astronauts to perform them – one to visit and one to stay.

And to oversee all of this, the European Space Agency’s Columbus Control Center in Oberpfaffenhofen, Germany, will come online for the first time.

“This is history,” said Mission Specialist Léopold Eyharts, the ESA astronaut from France who will remain on the station after his shuttle crewmates leave. “Europe is doing today things that we never did before. This is really a first step into permanent operations in space.” 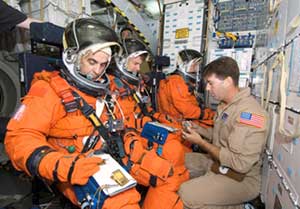 Eyharts will take -- or float -- the literal first step into Columbus, but he and his crewmates will have a lot of work to do before he gets to that point. Even getting the laboratory out of Atlantis’ cargo bay will be a challenge. Columbus was designed before NASA’s Return to Flight after the Columbia accident. One of the modifications made to the shuttle was the addition of a 50-foot boom used by the shuttle’s robotic arm to inspect the shuttle’s heat shield. There’s not quite room for it and all of Columbus.

The grapple fixture – or handle – that the robotic arm uses to pick Columbus up and out of the cargo bay gets in the way of the boom, so the laboratory is being launched without the handle attached. During the mission’s first spacewalk, mission specialists Rex Walheim and Hans Schlegel – an ESA astronaut from Germany– will put it back on.

“That has to go exactly as planned,” Sarafin said. “Otherwise we can’t get Columbus out of the payload bay.”

Once it’s out, however, the installation should be pretty straightforward, according to Lead Station Flight Director Sally Davis.

“I think I’ll jinx it if I say it’s going to be easy to install,” she said. “But the actual mechanical connection is a common berthing mechanism, which we’ve used many times in the past. I don’t foresee any problems with that.”

Once those connections are made on the shuttle’s fourth day in space and a few preparations are completed, Eyharts will be able to take a quick peek inside Columbus on the following day.

“I think it will be very emotional,” Eyharts said. “If we think of all the work that has been done, being the last part in the chain is something that is really nice and fills you with pride. I think that will be very visible.” 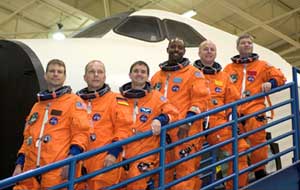 Image to right: Attired in training versions of their shuttle launch and entry suits, the STS-122 crew members take a moment to pose for a photo during a training session in the Space Vehicle Mockup Facility at the Johnson Space Center. Image credit: NASA

NASA’s ground control will be in charge for some of the initial activation of Columbus systems, but once the laboratory’s computers are up and running, the Columbus Control Center will take over. That doesn’t mean, however, that Eyharts and Schlegel’s American crewmates – Walheim, Commander Steve Frick, Pilot Alan Poindexter, mission specialists Stanley Love and Leland Melvin, and station Flight Engineer Daniel Tani, who will come back in Eyharts’ place – will abandon them to the work.

Sarafin said just about any time the crew is not doing a spacewalk, they’ll be working inside Columbus to get it up and running. In fact, Frick said much of the transformation will take place while the shuttle is still there. The goal is to get as much of Columbus’ outfitting done as possible. That way, after the shuttle leaves, Eyharts can devote more time to science.

“I think it’s great, because we have been focused so much on basically assembling the infrastructure of the station – the trusses that provide power and cooling and data and communications,” Frick said. “So once we get this up and running, because they’ve got all those trusses up there to provide electrical power, they’ll be able to activate these experiments and start doing excellent science.”

Davis said her European counterparts are eagerly anticipating doing just that, and she can understand why. Her first flight as a flight director was in 1998, when the Unity Node – the first major U.S. component – was added, and she remembers the excitement.

“When the moment arrived for them to open the hatch and float in, it was like angels sang,” Davis said. “I thought, ‘Wow. That’s great stuff.’ I’m sure the folks in the Columbus Control Center will feel the same way when they watch the hatch open and watch their crew members go into their module for the first time.”
› Back To Top