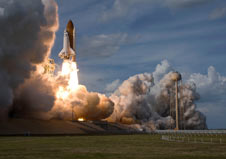 Astronaut Rex Walheim works on the outside of the Columbus laboratory to make it part of the International Space Station. Credit: NASA
View Hi-Res Image 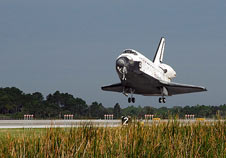 
Columbus took its part on the stage of space science during the STS-122 mission as a crew of seven space shuttle astronauts worked with three residents of the International Space Station to add a new laboratory to the orbiting research facility.

Space shuttle Atlantis was the delivery vehicle of choice for Columbus, a 23-foot-long cylinder equipped to host experiments inside and outside the station. Astronauts will work inside the lab on some of the research, while other experiments operate independently to test theories of space science.

The laboratory module was built by the European Space Agency and is Europe's first spacecraft for astronauts. It is also the main contribution by ESA to the International Space Station program. Columbus joined NASA's own laboratory at the station, a module called Destiny that has been in space since 2001. Columbus and Destiny in turn will be joined in the coming months by a lab complex built by Japan called Kibo to form the most advanced cluster of research facilities ever launched.

Before NASA and ESA could look ahead to the potential for research, the crew of the STS-122 had to deliver Columbus, install it on the station and activate its myriad systems, ranging from life support to experiments designed to begin operating right away.

That work began with a stunning liftoff Feb. 7, 2008, from NASA's Kennedy Space Center in Florida. Atlantis leapt off Launch Pad 39A at 2:45 p.m. EST and rode a brilliant plume of golden fire and gray smoke into space.

Commander Steve Frick and Pilot Alan Poindexter steered Atlantis on a precise path to catch up with the space station on Feb. 9. Mission Specialists Leland Melvin, Rex Walheim, Stanley Love and ESA astronauts Hans Schlegel and Leopold Eyharts conducted inspections of the heat shield and made preparations for what would be a busy schedule of spacewalks, supply transfers and activation duties at the station.

Aboard the space station itself, Expedition 16 Commander Peggy Whitson and Flight Engineers Dan Tani and Yuri Malenchenko photographed Atlantis' approach. The trio also had been in the midst of a hectic schedule, first handling the arrival of a Russian cargo capsule and then preparing to host the seven STS-122 astronauts and Columbus.

Clad in protective spacesuits, Walheim and Love left the station's Quest airlock to connect a grapple fixture to the outside of Columbus as it sat inside Atlantis' payload bay. The station's robotic arm played the role of construction crane as it hoisted the 10.3-ton Columbus out of Atlantis and maneuvered it carefully around the shuttle and structure of the station.

Eyharts, who was a general in the French air force before training as an astronaut, operated the robotic arm to line up Columbus with a port or hatch on the Harmony connecting module. He then maneuvered the module the last few inches to make Columbus a permanent research component of the space station.

"The European Columbus module is now a part of the ISS," Eyharts said after connecting Columbus on Feb. 11.

The addition gives Europe a permanent footing in space, and the mission was seen as a starting point for more European contributions to the station, including cargo flights by a new spacecraft known as an Automated Transfer Vehicle, or ATV. Bigger than the Russian Progress supply capsules, the ATV was designed to carry whole experiment racks to the station.

The station's pressurized modules are built around these refrigerator-sized racks because they can be set up on Earth and easily connected by an astronaut in space. Columbus is big enough to hold 16 racks -- some for experiments, others for station subsystems.

"From now on, Europe has its presence in space," Schlegel said after the flight.

After serving on the STS-55 mission in 1992, Schlegel waited almost 16 years for his second flight. He said the experience was worth it, particularly the chance to don a spacesuit and venture outside the station on a spacewalk, also known as an Extravehicular Activity or EVA. He joined Walheim for the second EVA of STS-122.

The pair spent most of the spacewalk hooking up a new nitrogen tank assembly on the central truss of the station. Atlantis brought back the old one at the end of the flight. The tanks are a key component of the cooling system that pumps ammonia through fluid lines on the station to radiate heat into space.

Walheim and Love joined forces again for the final spacewalk two days later, on Feb. 15. Working again on Columbus, the astronauts bolted a pair of experiment suites to platforms on the outside of the lab. The EuTEF package held eight research projects that required exposure to space, along with a camera aimed at the Earth. A second item known as Solar will observe the sun free of the distortion of Earth's atmosphere.

They wrapped up the last spacewalk by retrieving a faulty gyroscope from a storage slot on the station and packing it aboard Atlantis. The gyroscope can be repaired and returned to the station as a spare unit on a future mission.

The three spacewalks took a combined 22 hours and eight minutes. Construction and maintenance spacewalks during the International Space Station Program have totaled 104 EVAs for a combined time of 653 hours and 43 minutes. That is more than 27 days of spacewalking.

Atlantis left the growing space station on Feb. 18 as the shuttle-station complex flew over New Zealand. The undocking marked the end of NASA astronaut Tani's time on the station. He swapped places with Eyharts, who became a member of the Expedition 16 crew. Eyharts will activate many of the Columbus systems during his stay.

The shuttle crew members took their places again on the flight deck and lower level of the crew compartment for the entry and glide back to Kennedy on Feb. 20. Frick and Poindexter took a couple turns flying the ship through the Florida skies before Frick took over for the final approach to the Shuttle Landing Facility.

With the orbiter's main gear touching down at 9:07 a.m. EST, the STS-122 flight ended after 12 days, 18 hours, 21 minutes and 50 seconds. The shuttle traveled about 5.3 million miles during the mission. For Tani, the return to Earth stopped the clock on 120 days in the weightlessness of space.

"Dan was doing great," Frick said after the landing. "He looked better than I did. Really."

The flight sets the stage for the next construction mission to the station. Space shuttle Endeavour was already pointed spaceward on Launch Pad 39A as Atlantis soared overhead on its landing approach.