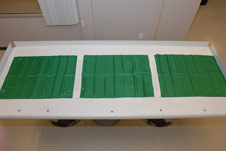 
A trio of flags from the Daytona 500 will set speed marks of their own as they race to 17,500 mph aboard space shuttle Atlantis.

The green starter's flags are tucked inside the shuttle during the STS-122 mission to the International Space Station. One of the flags was to be waved to begin the 2008 installment of what NASCAR calls the "Great American Race," while another will be presented to the winning driver. NASA will keep the third.

While NASA celebrates its 50th anniversary, the Daytona International Speedway is celebrating the 50th running of the Daytona 500 in 2008. Drivers and their crews have been known to pause at the race track to watch a shuttle streak into space on a plume of fire and smoke. The track is less than 100 miles from the shuttle launch pads at NASA's Kennedy Space Center on Florida's east coast.

Over the years, technology developed for the space program has found many uses on Earth, even helping NASCAR drivers stay safe and increase their performance. NASCAR drivers wear cooling suits very similar to what astronauts wear during spacewalks. Foam NASA developed for aircraft seats protects racecar drivers’ necks in a crash. And the same material that protects the space shuttle from extreme temperatures when it re-enters the atmosphere protects NASCAR drivers from the heat of their high-performance engines.

NASA and astronauts often pack mementoes aboard space shuttle flights to commemorate historical events, mark milestones and celebrate achievements. The effort also brings awareness of the space agency to a wider audience and gives people a chance to see a tangible sign of exploration.

Atlantis will also carry a dried red rose that will be woven into a NASA-themed float during the Tournament of Roses parade. The float also will celebrate NASA's first 50 years in existence.

The manifest of commemorative cargo takes on a bit of a European accent during STS-122 because the Columbus laboratory Atlantis will install on the International Space Station was developed and built in Europe. The cutting-edge research module will be used by institutions based in Europe to study space and the effects of weightlessness.

The special items for European representatives include dozens of fabric patches for the Columbus program, a host of decals and 20 flags representing the European Space Agency. More than 500 pins representing the STS-122 mission are also stowed inside Atlantis.

The items are packed to take up very little room inside lockers onboard Atlantis. Commemorative items are also chosen to weigh very little, but carry a big impact upon their return to Earth.