STS-121: On-orbit Testing Continues
The crew of space shuttle Discovery will continue to test new equipment and procedures that increase the safety of space shuttles during the STS-121 mission to the International Space Station. It also will perform maintenance on the space station and deliver more supplies and cargo for future station expansion. 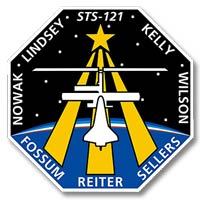 This mission is to carry on analysis of safety improvements that debuted on the Return to Flight mission, STS-114, and build upon those tests.

Discovery will bring a third crewmember to the station, European Space Agency Astronaut Thomas Reiter. This will be the first three-person crew since the Expedition 6 crew returned to Earth May 4, 2003. Without the space shuttle to ferry equipment to the station after the Columbia accident, only two people could be supported onboard until the necessary provisions were in place.

Discovery will carry the Italian-built Multi-Purpose Logistics Module (MPLM) Leonardo, with more than two tons of equipment and supplies aboard. 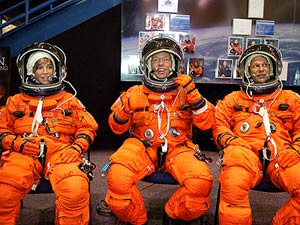 This will be the fourth trip to the station for Leonardo, the first of three Italian-built MPLMs. Equipment and supplies no longer needed on the station will be moved to Leonardo before it is unberthed on Flight Day 10 and put back into Discovery's cargo bay for return to Earth.

Steve Lindsey, an Air Force colonel, will command Discovery. He is making his fourth spaceflight, and second as commander. The pilot will be Navy Cmdr. Mark Kelly, making his second flight.

Others aboard, in addition to Reiter, will be mission specialists Mike Fossum, Stephanie Wilson, Piers Sellers and Navy Cmdr. Lisa Nowak. This will be the first spaceflight for Fossum, Wilson and Nowak. Sellers is making his second spaceflight.

Reiter will remain on the station, working with the station crew under a contract between ESA and the Russian Federal Space Agency. 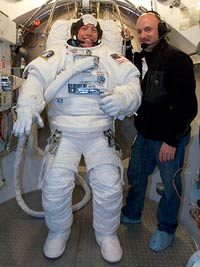 Two 6.5-hour spacewalks are scheduled for Sellers and Fossum on the fifth and seventh days of the mission. The first spacewalk will test the 50-foot robotic arm boom extension as a work platform. They will also begin maintenance of the station’s Mobile Transporter (MT) by safing or replacing a cable cutter unit to allow the station’s mobile robotic system to be translated in support of the second spacewalk.

During the second spacewalk the crew will replace the detached cable on the MT, which was inadvertently cut, and its reel assembly. They will also install a spare part for the station’s thermal control system for future use.

During STS-121, mission managers expect to evaluate the high probability of shuttle consumables supporting an extra day for the mission. If an extra day is available, the crew and flight control team are training for a third spacewalk. The third spacewalk would include tasks to test techniques for inspecting and repairing the Reinforced Carbon-Carbon segments that protect the orbiter’s nose cone and wing leading edges.

Inspections of the orbiter’s heat shield with a 50-foot-long Orbiter Boom Sensor System (OBSS) are scheduled for before Discovery arrives at the station and again near the end of the mission, on the day before and the day of undocking from the space station.

Undocking is set for Flight Day 11. Discovery's crew will make final preparations for the return home on Flight Day 12, with landing at the Kennedy Space Center's Shuttle Landing Facility on Flight Day 13.