STS-121 Pilot Mark Kelly: From the Seas to the Skies
Growing up, Mark Kelly didn’t think that becoming an astronaut was a realistic dream. He became interested in the space program as a child, when he watched the first Apollo missions to the moon. 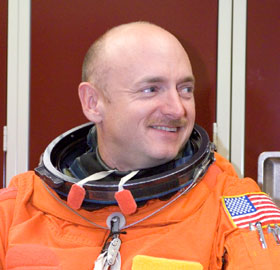 It was astronaut Alan Shepard, the first American astronaut to fly in space, who inspired Kelly's space dreams. Kelly was watching footage of Shepard landing on an aircraft carrier when he first began to realize how his dreams could become a reality.

"I remember thinking, 'Well, that looks like a great combination. You go fly airplanes in the Navy off a ship first, and then later you become an astronaut,'" he said. "I never thought it would really happen, but that was my goal."

Raised in West Orange, N.J., Kelly went on to attend the U.S. Merchant Marine Academy, graduating in 1986 with a bachelor's degree in marine engineering. He later received his master’s degree in aeronautical engineering from the U.S. Naval Postgraduate School in 1994.

He was designated a Naval Aviator in December 1987. He has more than 4,000 flight hours in more than 50 different aircraft, and has over 375 carrier landings.

In April 1996, Kelly was selected by NASA to become a part of its Astronaut Corps. He will serve as the pilot of STS-121 on the shuttle’s journey to space, and the intravehicular activity crewmember, guiding spacewalkers in completing tasks in space. 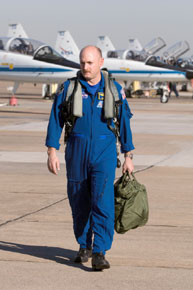 Having flown on STS-108 in 2001, Kelly has long been aware of the risks of spaceflight, and has done his best to prepare his family and his two young children.

"My family deals with those risks. The best I can do is talk to them about some of those risks," he said. "I want the experience of me going up into space to be a positive one for them."

Kelly welcomes the responsibility that comes with serving as the mission's pilot. He was pilot of Endeavour, the 12th shuttle flight to visit the International Space Station. The crew delivered the Expedition 4 crew and returned the Expedition 3 crew, unloaded more than three tons of equipment and supplies and performed one spacewalk to wrap thermal blankets around ISS solar array gimbals.

Kelly has 4.8 million miles under his belt thanks to the 12 days of STS-108. STS-121 is the second mission in the Return to Flight series, the second mission on Shuttle Discovery since Columbia in 2003. The crew will deliver supplies and equipment to the orbital outpost, and continue the testing and development of new hardware and procedures designed to make space shuttle flight safer.

Kelly's commitment to the spaceflight program has grown only stronger through his intense training experiences. He said that the risk an individual like himself has to take to fly in a space shuttle is well worth it, when it comes to the benefits that people derive from having a space program. The opportunity to fly in space is one for which Kelly and many other astronauts are willing to make sacrifices. 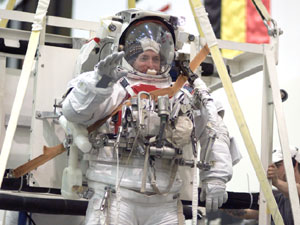 Image to left: STS-121 Pilot Mark Kelly, attired in a training version of the Extravehicular Mobility Unit space suit, waves as he is about to be submerged in the waters of the Neutral Buoyancy Laboratory near the Johnson Space Center, Houston. Credit: NASA

"A trip to space is a big motivator to give up some things in your personal life. Obviously, you can’t give up everything and you don't want to," he said. "You look at it as a privilege. You really decide that you’re going to put the time in and work really hard to get to the point where you’re ready."

When it comes to looking toward the future, Kelly said that this mission contributes to the construction and development of the space station, to better learn how people can live in space for long periods of time.

"Having the orbiters available to take people and logistics and things home from the space station will move us more down the road in the right direction, to be prepared one day to make those longer journeys, hopefully, to Mars," he said.
Donna K. Lin
Johnson Space Center
› Back To Top