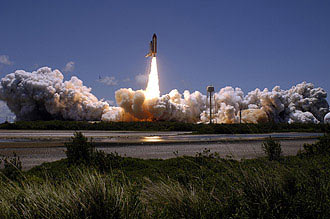 Image above: Under clear blue skies, the launch of Space Shuttle Discovery on mission STS-121 kicks off the fireworks for the U.S. holiday. Photo credit: NASA/Tony Gray + View High-res

On July 4, 2006, with a rocket's red glare, Space Shuttle Discovery lifted off from Kennedy Space Center in a spectacular display of sound and light befitting of Independence Day.

Commanded by Steven Lindsey, Discovery and its crew of seven astronauts roared from Launch Pad 39B to begin a 15,000-mph chase to rendezvous with the International Space Station.

As Discovery raced into the bright blue sky, cheers and applause erupted across Kennedy and along the nearby beaches of Florida's Space Coast. 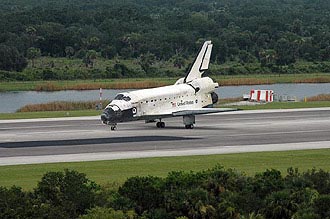 Space Shuttle Discovery made a picture-perfect touchdown at Kennedy's Shuttle Landing Facility in Florida at 9:14 a.m. EDT. Commander Steven Lindsey and Pilot Mark Kelly guided the ship as it made its 17,000 mph descent from space. The landing completes a 13-day mission to the International Space Station.