Six of the seven crew members of the next return-to-flight mission, STS-121, converged at NASA's Kennedy Space Center in Florida on Feb. 17 and 18 to take part in the Crew Equipment Interface Test.

The astronauts typically gather before flight to inspect the orbiter, and this mission is no exception. The crew will fly on Discovery to the International Space Station to deliver more supplies and cargo for future station expansion.

Image left: Mark Kelly inspects one of the windows that will fly on Space Shuttle Discovery during the mission. Image credit: NASA/KSC
+ View high resolution image

Pilot Mark Kelly also served as pilot for the STS-108 Endeavour mission in December, 2001 delivering over 3 tons of equipment and supplies to the ISS.

"It's been great to train with this crew," said Lisa. "I'm ready to go and looking forward to a good mission."

During the test, the astronauts performed hands-on training tasks to get further acquainted with the hardware they'll be working with in space. 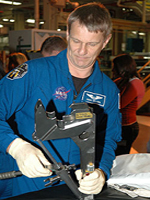 STS-121 will be the first spaceflight for mission specialists Mike Fossum, Lisa Nowak and Stephanie Wilson.

The crew eagerly climbed into, stretched above and crouched under the orbiter to become familiarized with as much of the vehicle as they could. 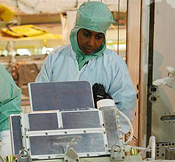 
European Space Agency astronaut Thomas Reiter was unable to attend the test. Reiter will remain on orbit, working with the station crew. 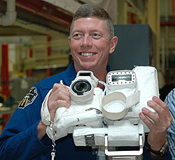 "We're just fortunate that we're living our dreams, there's a lot of work to do. We train hard and we work hard as a team," said first-time flyer Mike Fossum.


The launch of Discovery is slated for no earlier than May.