Getting Ready for an Orbital Gig
A handful of old friends gathered recently for a surprise presentation to STS-121 Mission Specialist Mike Fossum. Four Texas A&M University former students gave their fellow Aggie a shirt commemorating his special connection to the Aggie Corps of Cadets. 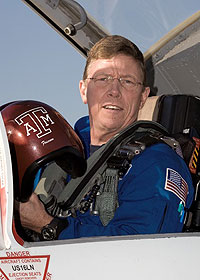 The corps offers students military training qualifying them for armed forces commissions after graduation. With more than 2,000 young men and women, the A&M corps is the largest uniformed body of students in the nation outside the U.S. service academies.

“Mike was the commanding officer of Squadron 3, one of the outfits in the Corps of Cadets at Texas A&M,” said Skip Moore, an International Space Station flight controller at NASA's Johnson Space Center.

“His former SQ-3 members are very proud to have one of our own going into space," said Moore, who works for Barrios Technology. "We wanted to do this for him as a special gesture, to really show him we are behind him all the way and make sure he had an SQ-3 item to carry into space.”

Moore was joined by Martin Cabaniss, who works locally with Boeing as an International Space Station payloads engineer. The others came from farther away. Russell Jones traveled from West Houston and pilot Lee Flagg came from Austin.

The presentation was Moore’s idea. He met Fossum while the two were working a Mission Control night shift several years ago.

“Mike left his card under my truck's wiper blades saying get in touch," Moore said. "He had noticed my personalized Texas A&M license plate with '66 SQ3' and thought I might be an Ag’ and then he saw my Former Students and Corps of Cadets stickers on my back window and knew I was.”

The two have remained in contact since. The others met Fossum at A&M, through their affiliation with Squadron 3. About 15 more former SQ-3 members bought shirts similar to the STS-121 / Texas A&M maroon polo shirt presented to Mike, and also pitched in to purchase his shirt. 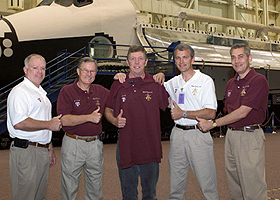 “When I was a fish (freshman) and first met him, Mike was one of my SQ-3 leaders,” said Flagg. “As time passed, I began to know him as a quietly confident and hard-working upperclassman. Mike was a positive influence in the outfit and helped me get through a tough academic transition from high school to college.”

The four who made the presentation say they'd be proud to have any Aggie in space, but that they are especially proud of Fossum.

“Mike is genuine and a good person - the best of what many folks term 'good people',” said Jones, who works for W.S. Bellows Construction Corp. “Besides, we’re long overdue to have an Aggie in space. The 'Space Cadet' comments started pretty quick but this should help to slow the Aggie jokes – maybe.”
› Back To Top