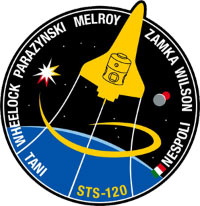 A series of recent shuttle missions have added to the International Space Station's exterior with new elements for its main truss. Now, Discovery will take into orbit a connecting module that will increase the orbiting laboratory's interior space.

October's STS-120 mission will bring the Harmony module, christened after a school contest, that will provide attachment points for European and Japanese laboratory modules. Known in technical circles as Node 2, it is similar to the six-sided Unity module that links the U.S. and Russian sections of the station.

"It has additional life support equipment that will allow us to expand out beyond a three-person crew. It’s this big boost in the capability which is really exciting,” she said.

Built in Italy for the United States, Harmony is a high-tech hallway and Tinkertoy-like hub. It is a 23- by 14-foot passageway that will connect the U.S. segment of the station to the European and Japanese modules, to be installed later this year and early next year, respectively.

Harmony will be the first new U.S. pressurized component to be added to the station since the Quest Airlock was attached to one of Unity's six berthing ports in 2001.

Image above: At left, is a detailed view of the Harmony Node 2. At right, is a view of Harmony attached to the International Space Station's U.S. Destiny laboratory.

Installing Harmony should be straightforward, Hassman said. But actually opening the gateway will require some shuffling. The shuttle will be docked to an existing adapter port where the node is meant to attach, so Harmony will be installed in a temporary spot on the first connecting node, Unity, until the mission is over. It will be moved by the station crew once the shuttle leaves.

After that, it’ll be ready for the European and Japanese laboratories. But labs require electricity. So Melroy’s crew – which includes Pilot George Zamka, mission specialists Scott Parazynski, Douglas Wheelock, Stephanie Wilson, Paolo Nespoli of the European Space Agency, and Daniel Tani, who will trade places with station Flight Engineer Clay Anderson as an expedition crew member – will continue to set up the station's exterior support truss and its power system.

After Harmony is installed, they’ll move the truss segment holding the station’s first set of solar arrays to a new home. The Port 6, or P6 arrays, as they are known, have been attached to the middle of the truss for the past seven years, positioned vertically to the rest of the station, acting as a temporary power system.

With the addition of two sets of arrays brought to the station on recent shuttle flights, the original arrays can be relocated during STS-120 to their permanent position at the very end of the left side of the truss. But that has its own trials and tribulations.

Image above: The official portait of the seven member STS-120 crew.

“This truss was the one where, when they retracted the solar array in December, they had difficulties,” LaBrode said. “Well, we’re going to take that during our mission and actually move it all the way outboard. It’s tight clearances, and the way that the robotics operations are here, the arm is completely extended out.”

In fact, the space station’s arm was designed with this move in mind. Engineers knew the arm would never need to reach farther than this segment – or it’s mirror on the right side – and so they built it to go just that far and not much farther. That creates some challenges. LaBrode compared it to trying to do something with your arm completely straight, rather than bent at the elbow – it limits your flexibility.

“It’s the design-limiting case,” Melroy said. “It’s the maximum capability of the robotic arm’s reach, and there are no cameras out there. So our spacewalkers are going to have to be out there going, ‘OK, a little bit to the right,’ guiding the robotic arm operator.”

Hassman said he’s confident they can pull it off.

“The good thing about the robotics stuff is the experience we have and all the tools the spacewalkers have allow us to really nail that stuff – knock it flat in terms of the planning,” he said.

And this is one case where familiarity does not breed contempt – or even boredom.

“It’s funny,” LaBrode said. “This is my fourth lead, but I see myself saying this every time. I know all the other ones have been pretty exciting, but this has got to be the most exciting one. They’re all completely critical to the success, all the way up to completing our president’s vision, going to the next step. But they just seem to get more and more complicated as they go along.”