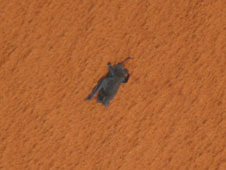 This free tail bat was hanging on to space shuttle Discovery as the countdown proceeded. Credit: NASA
View Hi-res Image 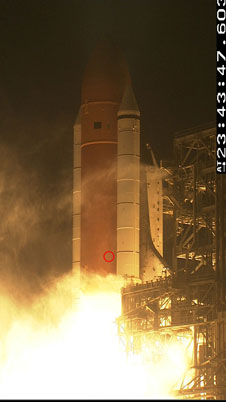 The bat was seen on the external tank as the shuttle cleared the launch tower at NASA's Kennedy Space Center. Photo credit: NASA
View Hi-res Image

A bat that was clinging to space shuttle Discovery’s external fuel tank during the countdown to launch the STS-119 mission remained with the spacecraft as it cleared the tower, analysts at NASA’s Kennedy Space Center concluded.

Based on images and video, a wildlife expert who provides support to the center said the small creature was a free tail bat that likely had a broken left wing and some problem with its right shoulder or wrist. The animal likely perished quickly during Discovery’s climb into orbit.

Because the Merritt Island National Wildlife Refuge coexists inside Kennedy Space Center, the launch pads have a number of measures available, including warning sirens, to deter birds and other creatures from getting too close. The launch team also uses radar to watch for birds before a shuttle liftoff.

Nevertheless, the bat stayed in place and it was seen changing positions from time to time.

Launch controllers spotted the bat after it had clawed onto the foam of the external tank as Discovery stood at Launch Pad 39A. The temperature never dropped below 60 degrees at that part of the tank, and infrared cameras showed that the bat was 70 degrees through launch.

The final inspection team that surveys the outside of the shuttle and tank for signs of ice buildup observed the small bat, hoping it would wake up and fly away before the shuttle engines ignited.

It was not the first bat to land on a shuttle during a countdown. Previously, one of the winged creatures landed on the tank during the countdown to launch shuttle Columbia on its STS-90 mission in 1998.