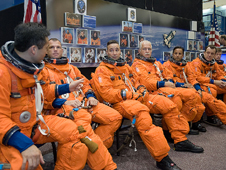 Attired in training versions of their shuttle launch and entry suits, the STS-119 crew members await the start of a training session in the Space Vehicle Mockup Facility at Johnson Space Center, Houston. Image: NASA

The STS-119 mission will deliver to the station the final set of solar arrays needed to complete the station's complement of electricity-generating solar panels, and through them support the station's expanded crew of six in 2009.

And that's not even counting the science.

Over the past year, one new connecting node – Harmony – and two new international partner laboratories – the European Columbus and the Japanese Kibo – have been added to the space station, expanding its capacity for science experiments. And one of the reasons the crew is being expanded is to have more hands aboard performing those experiments. The additional electricity provided by the new solar arrays will help power those experiments.

The set of solar arrays that the STS-119 crew will be bringing up includes two solar array wings, each of which has two 115-foot-long arrays, for a total wing span of 240 feet, including the equipment that connects the two halves and allows them to twist as they track the sun. Altogether, the four sets of arrays can generate 84 to 120 kilowatts of electricity – enough to provide power for more than 40 average homes. Since the three existing arrays can handle the majority of the station's day-to-day operational and life support needs, the newest solar array will double the amount of power available for scientific research.

"We're able to do a lot of things in our current configuration, and we're not too power limited," Alibaruho said. "But we still have some other things to get on orbit. We don't have the Columbus module and the Kibo module completely full of experiments, the way we expect to have it in coming years. So we need the additional power capability to be able to expand the science capability."

Adding the additional power may prove a bit tricky, however. This will be the fourth truss segment sporting solar array wings to be installed on the station, but only the second that's quite this far out on the station's truss. The segment is called the S6 truss – "S" for starboard, the right side of the station, and "6" for its place at the very end of the starboard truss. 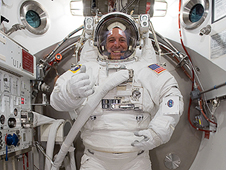 To install it, the station's robotic arm must extend its reach just about as far as it will go, leaving it with very little room to maneuver. The same was true of its mirror image on the port side of the station – the P6 truss segment – so the crew expects to be able to pull it off without a hitch. But that doesn't mean it will be easy.

"We've done it before, but we haven't done it with these exact same people," Discovery's commander, Lee Archambault, said. "But there are some very good lessons learned out there, and we'll certainly capitalize on those."

More lessons learned for Discovery's mission will come, in particular, from previous experience unfolding the solar arrays. When the first set of the station's solar arrays was unfolded during the STS-97 mission, the crew ran into a problem called "stiction" – the plastics and polymers that coat the panels of the solar arrays stuck together. Then later, when those same solar arrays were folded up, moved and redeployed, the wires that guide the panels got snagged, causing one of the arrays to tear.

These arrays aren't likely to ever need to be folded up and moved to a new location, and by the time the second set of arrays was ready for installation, engineers had come up with a way around the stiction problem. So neither of those issues is expected to crop up this time around. Still, lead shuttle flight director Paul Dye said that doesn't mean you can expect it to go smoothly.

"It's always the thing that you think you have down, that's routine, that comes back and bites you," Dye said. "It'll either be routine or it will be heart stopping, like always." 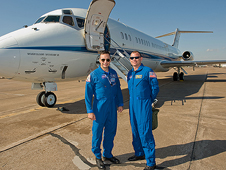 If some new problem does present itself, there should be plenty of time to troubleshoot it. The STS-119 mission includes four spacewalks, but has only one and a quarter spacewalks worth of work that has to be done before the next mission. The first spacewalk will be devoted to installing the new solar arrays, and during the third, the crew will move the CETA – crew and equipment translation aid – carts from the port side of the station's truss to the starboard to clear a path on the port side of the truss that will be needed for STS-127.

Besides that, there are a lot of get-ahead tasks that Discovery's crew will have the opportunity to check off -- everything from deploying cargo attachment systems on the starboard truss to installing a GPS antenna that will help guide the Japanese H-II Transfer Vehicle to the station later in the year. Those are important tasks, but there's no immediate need for them. So, if necessary, they can be put off until a later flight.

"There's a great potential to have some issues that we may need some additional spacewalking time to go alleviate," Alibaruho said. "This mission is structured in such a way that we could conceivably go address them without necessarily having to extend the mission or add a spacewalk."

One way or another, the crew plans to get the last truss segment and its two solar array wings installed. And at the end of the mission, when the shuttle undocks from the space station, Archambault said he can't wait to get his first look at them during the flyaround, when the two arrays on the port side of the station will for the first time be balanced out by a matching set on the starboard side.

"This will be the first time we get a flyaround with imagery of the space station looking about what it's going to look like in its final configuration," Archambault said. "We've still got to install Kibo's external facility and Node 3 with its cupola further on. But for all intents and purposes, 99 percent of it is going to look just like the plans after we get out of there."