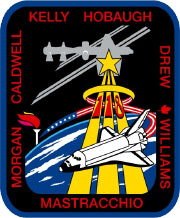 Like all shuttle missions, STS-118 is about the future: putting the International Space Station a step closer to completion and gathering experience that will help people return to the moon and go on to Mars.

Image at right: The STS-118 insignia represents the continuation of the assembly of the International Space Station and the pursuit of knowledge through space exploration. Credit: NASA

But this mission also will see a two decade-old dream realized and a vision of inspiration completed. Twenty-two years after first being selected as Christa McAuliffe’s backup in the Teacher in Space Project, Barbara Morgan will strap into space shuttle Endeavour as a fully-trained astronaut. She is one of five mission specialists in the seven-member crew.

The little bit of assembly – as in assembly of the International Space Station – refers to the next segment that will be attached to the right side of the station's backbone, or truss. The new segment, known as the S5, is relatively small and weighs about 5,000 pounds. The piece provides clearance between sets of solar arrays on the truss structure.

That doesn’t mean, however, that installing it will be easy. Every crew member will play a part. Pilot Charles Hobaugh and space station Flight Engineer Clay Anderson will operate the station robotic arm that moves the segment into place, while spacewalkers David Williams and Richard Mastracchio provide guidance from the outside and finish the installation. Commander Scott Kelly and mission specialists Tracy Caldwell and Benjamin Alvin Drew will help out inside. Morgan will operate the shuttle robotic arm to provide television views of the operation.

“It’s less than two inches from some critical electronic components that we want to make sure we don’t come in contact with,” Kelly said. “So that’s a very tight clearance.” 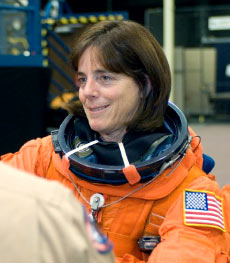 “I think right now the manifest has us bringing up about 5,000 pounds and then bringing down about 5,000 pounds,” Kelly said. “So it’s a lot of spare parts, food, clothing, scientific experiments. We’ll unload that and then reload it with stuff that needs to come home – garbage, spare parts that are no longer needed on the station.”

Then there’s the repair work, which Lead Station Flight Director Joel Montalbano expects to be one of the most difficult parts of the mission. One of the station’s control moment gyroscopes – a spinning wheel used to control the space station’s orientation – experienced problems and was shut down in October. Program managers determined that it needed to be replaced during STS-118. Kelly’s crew had less than a year to train for the task.

“The other stuff is a challenge, but we’ve known it was coming,” Montalbano said. “We’ve developed procedures, we’ve trained the crew – it’s all known. The gyroscope, it’s a little bit new to us. We’re putting a major task in when we’re well into training.” 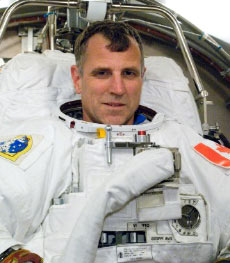 Luckily, it’s not new to NASA. The crew of STS-114 replaced a faulty gyroscope in 2005, and Montalbano said learning from their experience should help the team overcome the time crunch.

Added all together, it’s a lot of stuff to get done in one mission – but thanks to an electrical boost from the space station, the 118 crew could have a little more time than most missions to get it all done. Endeavour will be the first to try out a new system designed to let the shuttle use electrical power from the station.

The extra juice will allow Endeavour to stay in space for an extended period of time while docked to the station. STS-118 currently is an 11-day mission with three spacewalks planned. Mission managers could add three more days and an additional spacewalk after the Station-Shuttle Power Transfer System (SSPTS) is activated and checked out.

Future missions could gain as many as six extra days once all the station’s solar arrays are installed and providing power to the SSPTS. This will become more important as the construction of the station continues.

“I’m really excited about going up and doing our jobs and doing them well,” Morgan said. “I’m excited about experiencing the whole spaceflight, seeing Earth from space for the very first time and experiencing weightlessness and what that’s all about. I am excited about seeing what it’s like living and working onboard the International Space Station.”

Morgan trained side by side with McAuliffe and witnessed the 1986 Challenger accident in which McAuliffe and her six fellow crew members died. The Teacher in Space Project was suspended then, but Morgan held on to her NASA ties. In the months following that tragedy, she went on the visits McAuliffe would have made, talking to children and teachers all over the country. Then, when she was selected in 1998 to become a full-fledged astronaut, she jumped at the opportunity.

In 2002, Morgan was chosen as the first educator to become a mission specialist astronaut. The Educator Astronaut Project evolved from the Teacher in Space Project. Both aimed to engage and attract students to explore the excitement and wonder of spaceflight and to inspire and support educators. Morgan's primary duty is the same as it is for the entire crew -- accomplish the planned objectives of the station assembly mission. But she also will take part in several education-related activities.
› Back To Top