Exploration's Past Meets Its Future

NASA, intently focused on leading the next phase of American exploration, is preparing to honor those who led one of the first phases 400 years ago.

NASA will fly a nearly 400-year-old artifact unearthed at Jamestown, Va., the site of the first permanent English settlement in the Americas, into space aboard Space Shuttle Atlantis during the STS-117 mission. 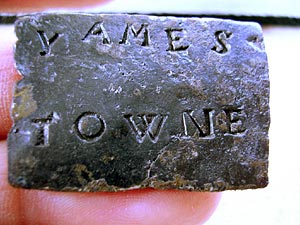 Image to right: This lead cargo tag -- which reads "Yames Towne" -- is believed to have been discarded from a shipping crate or trunk arriving at Jamestown, the site of the first permanent English settlement in the Americas, from England in about 1611. NASA will fly this artifact and two sets of Jamestown commemorative coins aboard Space Shuttle Atlantis in March 2007. Credit: NASA

After the mission, the artifact -- a lead cargo tag reading "Yames Towne" -- will have logged more than four million miles over four centuries traveling from England to Jamestown, then to and back from the International Space Station.

The tag, found at the bottom of a well during an archeological dig at the site of James Fort on Jamestown Island, is believed to be a discarded shipping tag from a crate or a trunk arriving from England around 1611. It indicates the strengthening of trade patterns during the colony's early days. 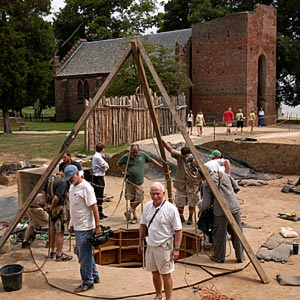 Image to right: The tag was found at the bottom of this well during an archaeological excavation at the James Fort site on Jamestown Island. The central figure in this photograph is William M. Kelso, the director of archaeology at Historic Jamestowne. Kelso led the Jamestown Rediscovery Project that unearthed more than a million artifacts from the Jamestown site. Credit: NASA

The commemorative coins, a $5 gold piece and a silver dollar, were authorized by Congress and contain visual references to Jamestown's legacies. When returned from space, NASA will present one set to Virginia Governor Tim Kaine for display at Jamestown Settlement, a 17th century living history museum. The second set will go on display at the National Park Service's Historic Jamestowne Visitor Center.

Also following the flight, NASA will return the shipping tag to Historic Jamestowne for display in its Archaearium, a new archaeological museum showcasing items unearthed over the past 13 years during excavations that include the long-lost remains of James Fort.