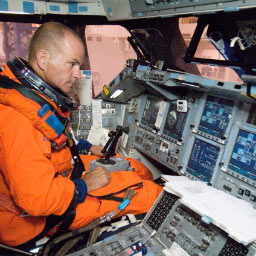 If you missed either of the last two missions, now would be the time to catch up.

When Atlantis heads for the International Space Station in June, its mission may sound a little familiar. The crew will install a new truss segment, unfurl new solar arrays and fold up an old one – all tricky stuff that’s been done on the past two missions.

“I jokingly call those flights the test flights for us,” said Kelly Beck, lead space station flight director for STS-117.

And with two successful missions leading the way, those involved with this flight are hoping it will be the best yet.

“We’re really fortunate that we have those guys to follow,” Atlantis’ commander, Rick Sturckow, said. “Almost everything went great on those missions, and the things that didn’t go so well, we’re able to learn from.”

Along with Sturckow, the crew includes Pilot Lee Archambault and mission specialists Patrick Forrester, Steven Swanson, John "Danny" Olivas, Jim Reilly and Clay Anderson, who will launch on the shuttle but remain on the station to begin a long-duration flight. Expedition 15 Flight Engineer Suni Williams, who has been aboard the station since December 2006, will return home on Atlantis.

Atlantis' crew will install a new set of solar arrays on the starboard side of the station. These arrays will be a mirror image of those installed on the port side in September, and like the crew that installed the port arrays, the STS-117 crew will be in charge of unfolding the arrays and preparing them to track the sun and generate power. 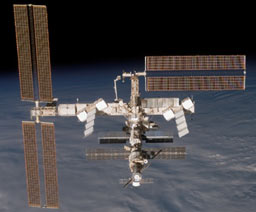 It sounds straightforward, but the first time a set of solar arrays was unfolded in space in 2000, things didn’t go quite as intended. The array panels stuck together, allowing cables meant to pull the arrays taut to come off their pulleys and leave the array slack.

Image at left: The port solar arrays are seen in the far left of this picture. STS-117 will install matching solar arrays and truss segments on the starboard side of the space station. Credit: NASA

The crew was able to fix the problem, but to avoid it altogether in the future the unfolding technique changed when the second set of arrays was launched on STS-115. By unfolding them more slowly and during periods when the station flew in sunlight, the arrays were deployed without a hitch – a circumstance the Atlantis crew hopes to repeat in June.

“It takes a little bit longer to deploy, but it’s done in a safer manner,” said Cathy Koerner, shuttle lead flight director. “We’ll be doing that again for 117.”

But the crew members also want to learn from a problem their predecessors experienced in September. A 10-foot wide rotary joint turns the solar arrays, allowing them to track the movement of the sun. But before that can happen, the bolts that keep the joint from shifting during launch in the shuttle’s cargo bay have to be removed.

That’s where the STS-115 crew ran into trouble – it turned out the bolts were screwed in more tightly than expected. It took more than 20 minutes and two astronauts to loosen one of them. So this time, Sturckow said, Swanson and Forrester, the spacewalkers who will be removing the bolts during the mission's second spacewalk, will be prepared.

“They’re working out every day,” he joked.

In case that’s not enough, however, they’ll have a tool on hand that will give their elbow grease a little more oomph.

“We have a torque multiplier that we’re bringing up that they didn’t have,” Sturckow said. “So if we do encounter the same difficulty with high torques that they had, we’ll break out this tool. And we’ll apply whatever torque it takes to break the bolt or back it out at the higher torque settings. So I don’t have any doubt that we’ll be able to remove those launch restraints.”

And from STS-116’s mission, Atlantis’ crew is planning to learn from the problem Discovery’s crew encountered in retracting a solar array that was circling the Earth for more than six years. Like the arrays activated in December, the new arrays won’t be able to rotate and track the sun until another set of arrays is retracted. And if STS-116 is any indication, it won’t be easy. It took more than 71 tries and an extra spacewalk to neatly fold the array back into its box during that mission. 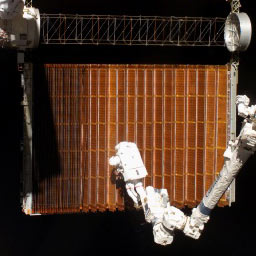 The original plan was for the arrays to be folded by ground command while all the astronauts were inside the station. But flight controllers now are working on a plan that would have Forrester and Swanson ready to assist with the folding during the second spacewalk of the mission. And if that doesn’t do it, Reilly and Olivas could give it a try during the third spacewalk.

Image at right: A spacewalker on the station's robotic arm manually helps retract a solar array during STS-116. Credit: NASA

The space station program will be looking at the data gleaned from all those attempts to retract the arrays to decide how to change the flight plan. Koerner said there’s still plenty of time to make modifications.

“It’s not like in the old days, where when you got within six months of flight you pretty much knew what you were doing,” she said. “When you’re doing assembly operations, everything that you plan to do is contingent on the flight prior to you and the hardware that’s already on orbit. In truth? The flight plan will be firmed up post landing when we can turn around and look at what we’ve done and feel good about the success of the mission.”