STS-117: Building on Experience
Space Shuttle Atlantis lifted off on mission STS-117 after a perfect countdown June 8, 2007, marking the first launch from Pad 39A at Kennedy Space Center in more than four years. 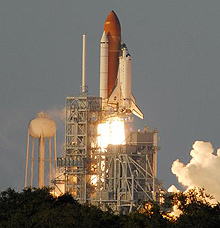 During the 14-day mission, the astronauts conducted a total of four spacewalks to install and activate the S3/S4 truss segment, retract the P6 solar array and repair an out-of-position thermal blanket on the left orbital maneuvering system pod.

The crew spent an extra day in space after the first two landing attempts on June 21 were foiled by Florida's stormy weather over Kennedy Space Center.

Image above: In a blaze of billowing smoke, Atlantis soars into a dusky Florida sky on a mission to expand the capabilities of the space station. Photo credit: NASA/Ken Thornsley. Image below: Atlantis touched down on a bright, sunny day on the desert runway at Edwards Air Force Base. Photo credit NASA/Tom Tschida 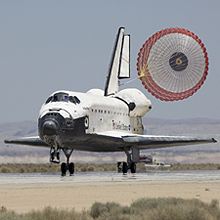 Atlantis made a safe and smooth landing on Runway 22 at Edwards Air Force Base in California on June 22.

Although this was her first time in space, Williams not only broke the record for the longest spaceflight by a woman, she also became the record-holder for most hours outside a spacecraft by a female, completing four spacewalks during Expedition 14.

After a 5.8 million mile expedition, Atlantis made the final leg of its journey back to Kennedy piggy-backed on top of NASA's Shuttle Carrier Aircraft, one of two modified 747 jetliners on the ferry-flight from Edwards. 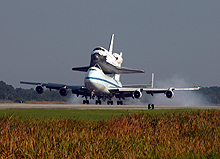