Shuttle Mission STS-116: A Hard Wire Job
NASA has said it over and over again: The coming missions to finish the International Space Station are among the hardest and most complex ever.

But if you ask the astronauts and engineers which of the final 14 assembly flights may be the most complex, many would point to Discovery's next mission, set to launch in December. 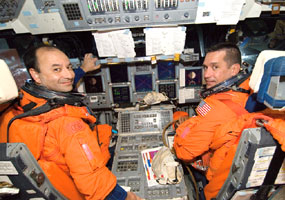 "What makes this one singularly unique is the fact that we're going to rewire the space station," Mark Polansky, Discovery's commander, said.

Since it went into orbit in 1998, the space station has been running on a temporary electrical system. Lead Space Station Flight Director John Curry compared it to the way you might build a house on the ground – until your electricity is hooked up, you probably plug your saws into a generator. That's basically what the astronauts building and living on the station have been doing for the past eight years.

But with the installation of two new electricity-generating solar array panels in September, all the pieces are now in place to switch to the permanent system. At your house, it would just be a matter of unplugging the saw from the generator and plugging it back into the wall. But in space, it's not that easy.

"Everything will be fine – if nothing breaks," Curry said.

The plan is to send astronauts out on two spacewalks, each devoted to rewiring half of the station. Though it sounds complicated, that part shouldn't be too difficult. Spacewalks are inherently dangerous and should only be done if there is no alternative, Polansky said, but as spacewalks go, these are pretty straightforward. The astronauts will head outside, wait for the team on the ground to send commands to switch off the power, and then unplug the power cables and plug them in new places. There might be the occasional stiff cable to deal with – that can happen in the minus 200 degrees Fahrenheit of space – and the process will likely be slow, but not especially complex.

The real pressure, Polansky said, will be on those back in Houston.

"I hold my breath every time we do spacewalks because you never know what can happen," he said. "So I'll definitely be watching. But I don't think I'll be as worried as the guys in Mission Control and the folks who have been working on the hardware will be. I think I'll have a lot of company in the worry department."

Curry confirmed that suspicion. He's been training for this mission for six years, and he said his team couldn't be any more prepared. But when asked what about the mission keeps him awake at night, he had no trouble coming up with a list.

"My team is the one that has to turn everything back on and get it running," he said.

Theoretically, everything should go fine. But there are a few things that could cause some big hitches. Several of them have to do with the unpredictability of equipment that's been in space for years. For instance, before any of the rewiring can be done, half of the solar array that's been providing the temporary electricity must be folded up to make room for the new solar arrays to rotate. That's never been tried before, and it may not be as easy as it sounds.

"It's been sitting out there taking thermal cycles (moving from minus 200 degrees Fahrenheit to plus 200 degrees Fahrenheit every 45 minutes) since November 2000," Curry said. "It's like a map – if you keep a map out in your car for six years and then you decide to fold it up again, you may get some waves in it or it may not fold back the same way at all."

Many of the main components of the electrical system have been flying that long and could cause similar large headaches. It's impossible to know for sure if the equipment will work until the power has been turned off, rewired and turned back on. And if it doesn't work, the astronauts can't leave it like that – the essential systems on the station would be running on whichever half of the station has power, but without both halves they won't have any backup.

That's not a position anyone wants to leave the station in for any longer than necessary. So, if Mission Control flips the switch and the lights don't all come on, the astronauts will have to try and fix whatever the problem is before they run out of time. If they can't, then it's back to square one.

"Then I have to tell the crew, stop what you're doing and undo everything," Curry said.

To avoid that, plans addressing possible problems are made well in advance.

"You put all your energy into being successful and doing it safely, while making sure you do it efficiently," Lead Shuttle Flight Director Tony Ceccacci said. "And then you step back after you get that completed and say, ‘What if?'" 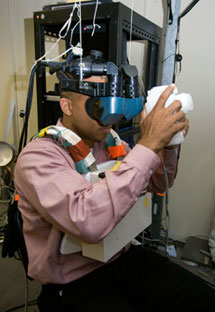 Polansky said the crew spends a lot of time training for those what ifs.

Image to left: STS-116 Mission Specialist Robert Curbeam uses virtual reality hardware to rehearse some of his duties on the upcoming mission to the International Space Station. Image credit: NASA

But, Ceccacci said, as much as you would like to, you can't plan for every contingency. You look at the most probable failure, impact to mission, complexity of recovering, then determine if you should spend the resources to develop the fix.

If the old solar array won't fold up, the astronauts won't be able to do any of their rewiring spacewalks until they either fold it up manually or jettison it. If the pump that keeps the electrical system cool doesn't work, there would only be enough time to rewire half of the station after replacing it. But he believes NASA is up to the challenge.

"Everyone has stepped up, is prepared, and is confident that this mission will be very successful," Ceccacci said. "As with all complex assembly flights, it's going to be interesting."