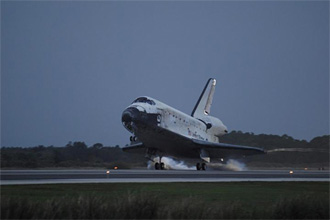 During the 13-day mission -- the 20th shuttle flight to the International Space Station -- the crew rewired the outpost's power system and continued constructing the station by installing the P5 integrated truss segment. Discovery's liftoff on the mission was the first nighttime launch in more than four years.

Williams replaced German astronaut Thomas Reiter, who served on the station since arriving aboard Discovery on the STS-121 mission in July 2006. 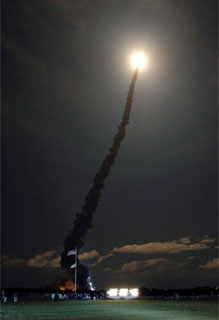 Higginbotham directed the transfer of 5,800 pounds of much-needed supplies and equipment to the station from the SPACEHAB single logistics module in the orbiter's payload bay.

Discovery roared skyward at 8:47 p.m. EST, illuminating the darkened sky in a spectacular light show. The orbiter and crew immediately began a two-day pursuit of the space station.

Image left: Like a shooting star flooding the night sky with its blazing light, Space Shuttle Discovery leaps toward the sky from Launch Pad 39B on mission STS-116. This was the first nighttime shuttle launch in more than four years. Image credit: NASA/Jim Grossmann

The following day, the crew performed a check-up of the orbiter's heat shield. The astronauts used the orbiter boom sensor system mounted on the end of the shuttle's robotic arm to slowly sweep over the orbiter's surface, as Mission Control in Houston looked for any damage caused during the climb to orbit. Discovery was deemed in good shape and ready for docking.

The chase ended Dec. 12 when the orbiter caught up with the station. Polansky maneuvered the spacecraft through a slow backflip below the station, allowing Expedition 14 Commander Mike Lopez-Alegria and Flight Engineer Mikhail Tyurin to take detailed photographs of the orbiter's belly. Discovery linked up with the station as the two soared high above South Central China, northwest of Bangladesh. That night, Williams officially took her place as a station resident and Reiter joined the Discovery crew. 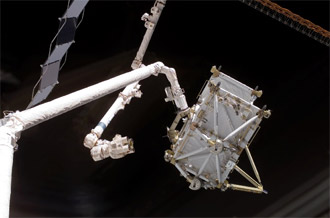 The crews wasted no time getting started on the mission's daunting task load. Using the shuttle's robot arm, Patrick gingerly lifted the P5 truss out of Discovery's payload bay and handed it to the station's arm, where it remained suspended overnight.

The next day, during the first spacewalk of the mission, Curbeam and Fuglesang aligned and installed the P5 on the end of the P3/P4 truss, extending the station's backbone by 11 feet.

Up next was the retraction of the station's P6 port side solar array, providing enough clearance for the P4 solar array to begin tracking the sun's motion. Fully extended, the gold-colored array's 31 panels, or "bays," stretched 120 feet along a system of guidewires. The bays are designed to fold up, accordion-style, and retract along the guidewires into storage boxes attached to the truss. Crew members sent the retract command, but instead of folding neatly, the bays repeatedly became hung up and wouldn't budge. After several hours of work in orbit and troubleshooting on the ground, 17 bays had been retracted -- enough to allow the crew to continue with the mission's tasks. 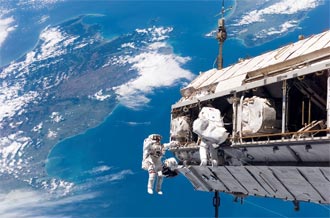 The partial retraction cleared the way for the next day's spacewalk, the 75th in the station's history and the second for the STS-116 mission. Curbeam and Fuglesang successfully reconfigured power on channels 2 and 3 of the outpost's electrical system, finishing the work in less than the allotted six hours.

During the spacewalk, "there were a lot of cheers on the ground," said Lead STS-116 Spacewalk Officer Tricia Mack. "It just kept clipping along and the next thing you know, at five hours they were in."

Williams accompanied Curbeam on the mission's third spacewalk two days later as the pair finished the power work outside the station, rearranging power on electrical channels 1 and 4. With this activity completed, the station is ready for the future additions of European and Japanese laboratory modules. 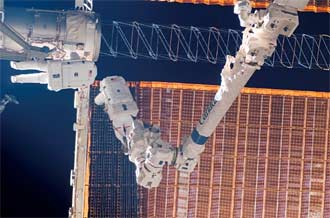 Only the issue with the uncooperative P6 solar array remained. Because the array would have to be fully retracted before the arrival of Russian Soyuz modules in the spring of 2007, NASA's Mission Management Team approved an additional spacewalk in which astronauts would try to manually unstick the arrays, hopefully allowing a full retraction.

On Dec. 18, Curbeam and Fuglesang once again floated out of the station's Quest airlock to begin the mission's fourth spacewalk. As the only STS-116 crew member to participate in all four spacewalks, Curbeam set a shuttle program record for the most spacewalks performed by one astronaut during a single mission. Williams and Higginbotham used the station's robotic arm to position the spacewalkers near the troublesome array, while Oefelein choreographed the activities outside. After a 6 1/2-hour effort, the astronauts completed the job to praise from crewmates and ground controllers. 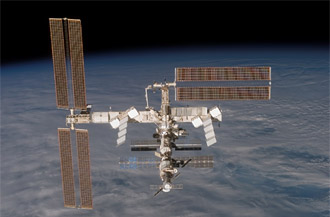 Discovery separated from the International Space Station on Dec. 19 to begin two days of final homecoming preparations, including a focused inspection of the orbiter's heat shield, deployment of three small scientific satellites and a checkout of landing systems.

Image left: Backdropped by the blackness of space and Earth's horizon, the International Space Station moves away from Space Shuttle Discovery after undocking on Dec. 19, 2006. Image credit: NASA

"On behalf of the crew of Discovery, we want to go ahead and also offer our congratulations to everybody on the ground, and our debt, our gratitude for all of the hard work which enabled us to go ahead and accomplish our tasks," Polansky said at a farewell gathering before the STS-116 crew departed the station. "It's always a goal to try and leave someplace in a better shape than it was when you came, and I think we've accomplished that."