NASA Night With the Houston Rockets Begins With McGrady Trading Spaces
It was a crowd pleaser at the Toyota Center on Feb. 5: a shout-out to NASA, the Rockets put another check in the “win” column and T-Mac got his jersey back.

When the Rockets’ Tracy “T-Mac” McGrady was asked last year what he’d be doing if he weren’t a pro basketball player, he said “astronaut.” That led to a visit to JSC for a day of livin’ the dream.

Fox Sports Network was producing a program about Rockets’ dream jobs and McGrady told the Rockets’ PR department he was a space fan. Then he said they “made some calls.”

“I have always been interested in what these guys do to get ready for their missions,” McGrady said. So last August he was put through some astronaut training and a lesson in Mission Control 101. McGrady flew in the motion-based simulator and performed a spacewalk courtesy of the Virtual Reality Lab.

Floating through virtual space was a dizzying but unique experience for him.

“Y’all wouldn’t believe how this actually feels,” he said.

Bob Curbeam, one of the mission specialists from the STS-116 Discovery crew, and Paul Uranga, Control Propulsion Instructor, coached McGrady during his stint in the simulator where he was at the controls for a launch and three landings.

“I really feel like I’m in space, man,” McGrady said after a few minutes into launch.

Gaining confidence after being surprised at how smooth the ride was at virtual Mach 7, he said, “I just want everyone to know in Houston that T-Mac is flying this thing.”

Then came the attempts at landing.

The first two went well. “I got this thing locked in, baby,” he said as he steered on target. 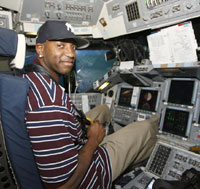 But Uranga threw in a curveball for the last attempt by programming in some bad weather -- including lightening -- causing McGrady to say, “he’s playing games with me.”

“Guys, please say your prayers ‘cause this ain’t looking too good,” he joked.

Two out of three ain’t bad.

“The eye/hand coordination that all great athletes have, showed in the simulator -- he did very, very well,” Curbeam said.

“Nobody can top my day,” an enthusiastic McGrady said after landing the shuttle. Then he handed his red #1 jersey to Curbeam and said, “It’ll be a huge honor if you can take this up.”

McGrady puts up points for the Rockets as a small forward/shooting guard. He’s a two-time NBA scoring champion and was selected as a starter for the 2007 NBA All Star game in Vegas next week -- his seventh time to be picked for the All Star game. 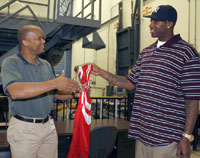 Curbeam is no stranger to setting the bar either -- he holds the record for most shuttle spacewalks in a single mission with four during Discovery’s last ride in December.

Fast forward six months and Curbeam is standing near half court in the Toyota Center -- not trying for a three-pointer but returning McGrady’s jersey.


Next to him were fellow Discovery crew members Mark Polansky, Joan Higginbotham and Nicholas Patrick -- all surrounded by the Rockets, Minnesota Timberwolves, the media and thousands of people, including JSC Director Mike Coats and many NASA employees.

The Rockets’ announcer made the introductions and then said, “Let’s hear it for the STS-116 crew and Tracy McGrady.” Curbeam then handed over the jersey to T-Mac as they shook hands.

Before December, that jersey had soared to high points, but not 250 miles high. It was well traveled, but hadn’t gone 5.3 million miles around the Earth. Now it’s going to be preserved.

“Beamer gave me a picture of him wearing the jersey and a certificate saying it was flown in space so I'll definitely get them all framed and maybe hang it in my home gym,” McGrady said.

Curbeam said earlier in the day that he loves basketball. And when the Rockets offered up the jersey he thought, “It’s cool to be able to do something for the team and for those guys. I wish them all the luck and something like this might spur them on to do well tonight and the rest of the season.”

The evening before the game, Fox broadcast the program featuring T-Mac’s visit to JSC. McGrady drew a comparison to being an astronaut and playing basketball -- both require “hard work, dedication and being a team player,” he said. 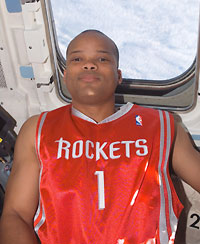 “I learned so much. And if NASA ever needs another commander, I’m definitely their man,” he said with a wink at the end of the show, then thanked everyone at NASA for the experience.

When Curbeam was asked if he would switch roles and train to be a Rocket for the day, he said, “I must admit, I think that T-Mac would make a much better astronaut than I would a pro basketball player.”

But if not an astronaut, what would be Curbeam’s second career choice? “I would definitely be a Sports Center anchor for ESPN -- that is the dream job,” he said.