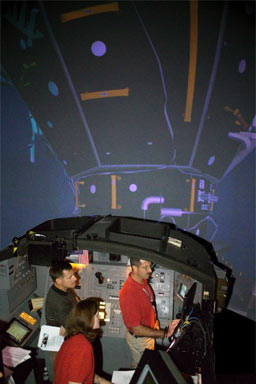 Now that everyone’s breathed a big sigh of relief that test flights of the space shuttle's safety improvements have gone well, it’s time to hold your breath again.

NASA’s ready to get back to building the International Space Station, which means the shuttle program is coming up on some of the most challenging space missions ever. And it all starts with the launch of Atlantis on STS-115 in August.

Atlantis' six crew members will install a second set of solar arrays on the space station, doubling the station’s ability to generate power from sunlight and adding 17.5 tons to its mass. It’s a mission they’ve had four years to train for, and it’s still no cakewalk.

“It’s a very busy flight,” Atlantis Commander Brent Jett said. “We’ve never had to fit so many activities back to back on consecutive days.”

Image at right: STS-115 astronauts train inside a vehicle simulator with full-sized simulations of the Earth and the International Space Station. Credit NASA

The closest the program has come is shuttle mission STS-110 in April 2002, Jett said. That crew performed two spacewalks in two days, much like what Atlantis' crew plans. But that flight had fewer high-priority, complex activities to perform on the two days between launch and docking.

Atlantis' mission will include all the safety features tested on the past two shuttle flights: improved imagery during launch, heat shield inspections in orbit, and a shuttle backflip as it approaches the station.

But beyond those now standard shuttle practices, the mainstay of Atlantis' flight will require robotics operations, three spacewalks and multiple ground-controlled checkouts as intricate as any done for station assembly.

Jett's crew must use the shuttle's robotic arm to inspect Atlantis' heat shield on the second day of the mission while they are on the way to the station, a shuttle safety enhancement. As soon as they dock to the complex on their third day in space, Atlantis' astronauts must unload the school-bus-sized package of solar panels, batteries and electronics. The crew will be going almost nonstop for seven days straight. 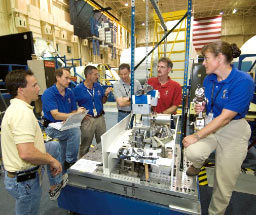 There are a hundred little – and big – things that could throw it off.

The biggest are the solar arrays themselves and the joint that will rotate them. When a matching set of 240-foot long arrays was deployed during the STS-97 mission in November 2000, the cables meant to pull them taut came off their pulleys. That would have left the wings slack and vulnerable to tearing and breaking had that crew not been able to fix it.

Atlantis Mission Specialist Heide Stefanyshyn-Piper, who will work with the arrays during two spacewalks, said she believes that problem has been fixed and won’t be an issue this time around. But the arrays have been packed away for several years – they were originally scheduled to be installed in May 2003. Because they’re so large, they have to be folded to fit in the shuttle’s cargo bay. Although the arrays have been checked and rechecked, Piper said one concern the crew has is that when it comes time to unfold them, they could stick. If so, the team has practiced ways to manually unfold them.

The crew and Mission Control have tried to think of anything that could go wrong and plan to deal with those potential problems. But they all know that despite the best efforts, the nature of a complex mission means you may encounter problems you did not expect.

Atlantis' flight will deliver the station's first Solar Alpha Rotary Joint – a 10-foot wide, wagon-wheel-shaped joint that allows the arrays to turn toward the sun. Nothing like this joint has ever flown in space. And there’s no guarantee it will work like it’s supposed to.

“Because we’ve never done one of these before, we just don’t know,” Piper said. “We think it’s going to work. On paper it works. But you just never know until you get it up on orbit.” 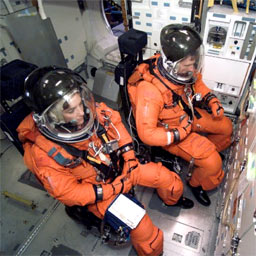 Lead Shuttle Flight Director Paul Dye echoed that sentiment, but on another subject. Already the largest spacecraft ever built, the addition of the two array wings is going to dramatically change the station’s appearance -- and balance. The responsibility for keeping it pointed in the right direction falls to Dye and his team in Mission Control. The computers should take care of it, but you can never be sure.

If the station did start to tilt, it can be righted. But any problems or hiccups that come up could throw off the mission’s entire timeline, Jett said. Adjusting the station’s orientation might require firing the shuttle’s engines, which would use up limited and valuable fuel.

The crew and everyone involved with the mission knows they are in the home stretch, and they are excited. Atlantis Pilot Chris Ferguson, who will help with a lot of the robotic arm work, is confident. He said he’s been studying for four years and he’s ready for his final exam.

“They’re high intensity ops, but I think we can do it,” he said. “I think we’ve considered everything we can consider before flight. If we can get through the first seven days, the rest is downhill. After Flight Day 7 – if it goes well – it gives us time, hopefully, to get some sleep.”