A Mission to Build On

Neither lightening bolts, nor a tropical storm, nor tricky technical challenges could ultimately keep Space Shuttle Atlantis and the STS-115 astronauts from their appointed mission: resuming construction of the International Space Station. 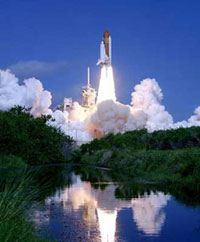 Pressing on after several delays caused by both weather and technical problems, the patience and persistence of the crew and missions managers finally paid off when Atlantis roared off its seaside launch pad, piercing the vivid blue Florida sky. Cheers and tears from crowds of workers and spectators accompanied the long-awaited and successful liftoff.

Carrying its six-member crew safely home after a successful 12-day mission, Atlantis made a perfect landing at NASA's Kennedy Space Center in Florida.

Commander Brent Jett and Pilot Chris Ferguson guided the ship as it made its steep descent from space into the predawn darkness, concluding their mission to install the P3/P4 integrated truss segment on the space station.