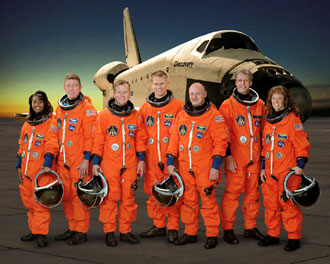 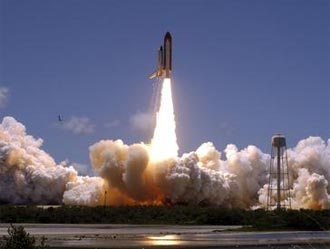 Space Shuttle Discovery rockets into the clear blue sky, creating its own fireworks display. History was made with the first ever launch on Independence Day. Image courtesy of Nikon/Scott Andrews.
+ View High-Res Version

July 4, 2006, at 2:38 p.m. EDT. Launch of Discovery was scrubbed twice, July 1 and 2, due to weather concerns. After a day's standdown, the launch attempt resumed on July 4 and Discovery lifted off on time. 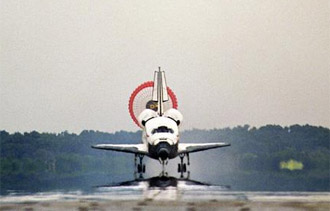 STS-121 was the second return-to-flight mission, demonstrating techniques for inspecting and protecting the shuttle's thermal protection system and replacing critical hardware needed for future station assembly. The mission also restored the station to a three-person crew for the first time since May 2003, leaving ESA astronaut Reiter aboard to join Expedition 13.

This was the most photographed shuttle mission in history, with more than 100 high-definition, digital, video and film cameras documenting the launch and climb to orbit. The images helped assess any damage sustained and potential risk for landing. In addition, the crew used the orbiter boom sensor system with a laser dynamic range imager, laser camera system and intensified television camera on the end, to examine the shuttle's nose cap, port wing, leading edge of the starboard wing, and outside of the crew cabin. No risk was found.

After docking to the station, the crew transferred the multi-purpose logistics module Leonardo to the Unity module from which they moved 7,400 pounds of supplies and equipment during their stay. The cargo included a new heat exchange for the common cabin air assembly that collects condensation out of the air on the station, a new window and window seals for the Microgravity Sciences Glovebox, and a spare U.S. extravehicular activity suit and emergency jet pack.

Astronauts performed three spacewalks: Refilled with 4,600 pounds of experiment samples, broken equipment and trash to be returned to Earth, Leonardo was moved back to Discovery's payload bay.

The return flight to Earth was delayed one day in order to add the third spacewalk. The mission management team determined there were enough consumables to extend the mission to test repair techniques and test a thermal imaging camera.

The trip home was one crew member short. Reiter remained behind to join Expedition 13, marking the first time since May 2003 that the station houses three crew members.