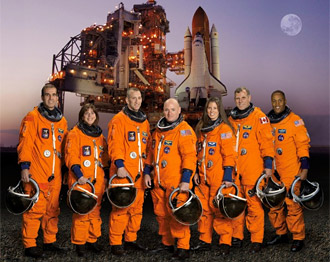 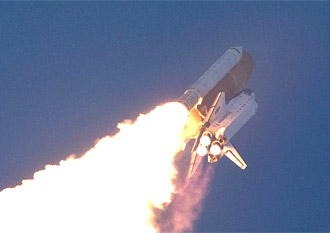 Launch was on time and Endeavour lifted off into an early evening sky before sunset. Endeavour carried a crew of seven, including teacher-turned-astronaut Barbara R. Morgan. The payload comprised the S5 truss, SPACEHAB module and external stowage platform 3 with a replacement control moment gyroscope, or CMG. This mission was the final one for the SPACEHAB module. Astronauts replaced the CMG for a faulty one on the International Space Station.

The launch returned Endeavour to active service after a three-year hiatus for major modifications. The work, conducted at Kennedy, included addition of a "glass cockpit," a global positioning system for landing and the Station-to-Shuttle Power Transfer System, known as the SSPTS. The system enables the orbiter to draw power from the space station, enabling an extended stay for the mission. 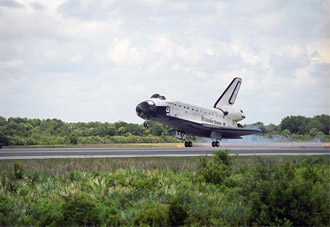 Image above: Endeavour kicks up dust as it touches down on runway 15 at Kennedy Space Center's Shuttle Landing Facility. Image credit: NASA/Tony Gray

On Aug. 9, before docking on the space station, the crew took a close look at the heat shielding on Endeavour's wing leading edges. They used the vehicle's robotic arm and orbiter boom sensor system. On Aug. 10, Commander Scott Kelly also performed a backflip with the orbiter so the International Space Station crew could take digital photos of the orbiter's underside, checking the tiles for damage.

The photography showed a 3-inch-round ding on the starboard underside and in-depth analysis showed damage occurred through the tile to the internal framework. After extensive engineering analyses and tests over several days, the mission management team decided not to direct a repair of the shuttle's damaged tile before landing. All members of the team believed that leaving the damaged tile "as is" did not pose a risk to the crew during re-entry.

The shuttle and space station docked at 2:02 p.m. EDT while traveling 214 miles above the southern Pacific Ocean, northeast of Sydney, Australia.

Mission managers first extended the flight to 14 days after successfully drawing power from the station via the SSPTS. The extension enabled a fourth spacewalk. Later, concern over Hurricane Dean's movement toward Texas caused mission managers to end the mission one day early.

Astronauts participated in a first for the space station. Mission Specialists Tracy Caldwell and Morgan installed a 7,000-pound storage platform using only the station's and shuttle's robotic arms. The stowage platform was attached to the P3 truss.

During the spacewalks, astronauts installed the S5 truss, a gyroscope and external stowage platform 3.

The mission also included three educational events featuring teacher-turned-astronaut Morgan. On several occasions, Morgan and other astronauts answered questions from children from the Discovery Center in Boise, Idaho, the Challenger Center for Space Science Education in Alexandria, Va., and in Saskatchewan, Canada.

On Aug. 11, the station's primary U.S. Command and Control computer shut down unexpectedly at 2:52 p.m. The redundant system reacted as designed and the primary backup computer took over, and the third computer moved into the backup slot. The shutdown did not affect the spacewalk. Station flight controllers brought up the third computer later after determining an errant software command was the cause of the shutdown.